-
One of my main concerns about coming to Austria was the possibility of a language barrier.  Since my German really doesn’t extend beyond ‘Danke schoen’,  and that I can only attribute to Wayne Newton singing his hit song on the Lawrence Welk show when I was young.  A legitimate concern, so I thought.
I can tell you that we’re 7 for 7 in people speaking English so far since our arrival.  Everyone from those you’d expect in the hospitality industry to the guy who works security on the trainline and the young girl working the cash at the neighbourhood Spar.  All good. 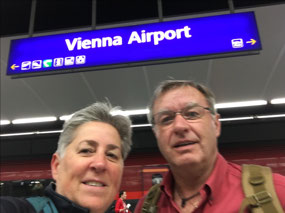 Made it!
So other than a 1/2 hour delay sitting on the Air Austria plane at the gate, unable to push back because of what was described as ‘traffic issues’ at Heathrow, our flights were all smooth and uneventful.  You know how they say that dogs have an uncanny sense of who likes them and who doesn’t?  And they tend to pursue those that aren’t particularly fans?  Well, I must exude that same scent to the traveling public.  I always get beside someone who wants to be chatty.  On our last leg into Vienna I was seated beside an American lady from Minnesota.
My new friend is Nancy.  She was actually quite lovely.  How could you describe her any other way when within 30 seconds of learning I was Canadian, felt the need to apologize for the way the PM was treated in the recent G7 summit.  To say she’s not a fan of her President would be an understatement.  I told her I’m really not political at all, so we turned our conversation to other mutual interests...travel, and scarves.  I was able to give her some recommendations for things to do in London when she gets back there later in the month.  All ‘free’ things, cause that’s the way I roll!  She even mentioned she may squeeze in a day trip to Paris as well.  So, I threw in my best ‘free’ recommendation for there as well.  As the plane cooled off mid flight, she hauled out a lovely silk and felted scarf that she made herself.  We ended up comparing photos of her products and the scarf I bought last month in Belfast.  Thankfully she lives too far away for me to go to any of her shows...but I do have her business card! 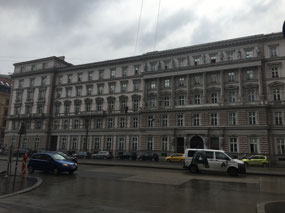 Old buildings in ‘the hood’
And let me tell you this...technology IS grand!  And a big shout out to my friend Elizabeth who turned me on to a couple of Apps.  With the help of my new Vienna App, I was able to leave the Praterstern train station and walk directly to my hotel.  And all without incurring any roaming charges on my phone.  That is gonna be one handy little app over the next few days! 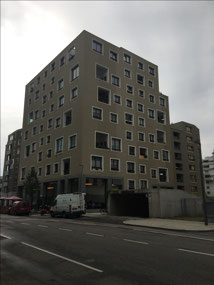 New and modern in ‘the hood’
It is quite obvious that the ‘weather charm’ didn’t make this trip with me, cause we were just headed out for a little exploration of the area when we got caught in a rain storm and got soaked to the skin.  Back to the hotel we went until it passed.  By then fatigue had set in, so a wee stroll around the neighbourhood and we’re back for an early night. 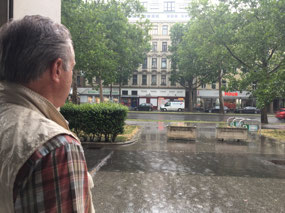 Caught in the rain...
We have to change hotels tomorrow.  We ended up adding a day onto our trip because it was that much cheaper to fly on a Tuesday than a Wednesday.  By the time we made that decision, I couldn’t add another day onto my hotel, so just booked this Ibis Budget hotel which is a 5 minute walk away.  We’ve stayed at this brand before when in Bruges.  Not the type of room to book if you’re shy...seeing that the shower is in the room with the beds.  Thankfully the toilet does get it’s own room, but the walls and doors are so flimsy that it’s only privacy for appearance sake!
Tomorrow’s forecast is warm and cloudy, but no rain!  Let the sightseeing begin!
Other Entries
- 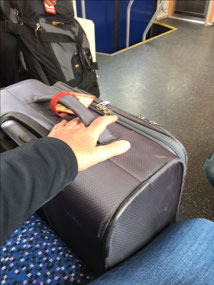 You’re going to have to share this app with me...’cause I’m the Queen of turning around 3 times and not knowing where I am!

I think I better get that app too

So go into your App Store and search for ‘whatever country you’re traveling to” travel guide offline. So Shelley, search ‘Lisbon travel guide offline’ and you should get some options for free and some for a fee. I picked ‘Ulmon” and free and so far I’m impressed. Same for you Fay. Some likely work better than others, but mine actually works as a GPS even when I’m not connected to wifi or on my own data.