The bar has been set

-
There are no words.  And unfortunately due to the vow of secrecy that currently binds me, I cannot divulge the particulars about my ‘Grand Expedition’.  Without giving away details or trade secrets about location or menu, I can tell you that once again Gingerline has set the standard.  It will be a tough act to follow. 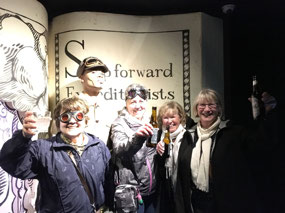 The Grand Expedition
I think it is safe for me to tell you that it was a unanimous decision by the ladies that the high level of enjoyment cannot be attributed solely to the entertainment, or the food, or even the company.  But an equal blend of all three.  Well, maybe not an EQUAL blend.  Let’s say 20/30/50. 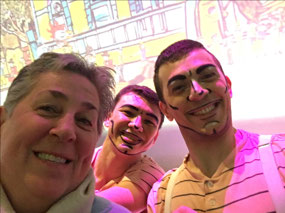 Me and the aeronauts
I must admit that my first thought when we 4 were seated at a table of 10 was ‘why couldn’t we have gotten a table to ourselves?’.  Then I gave myself a shake and said ‘because we 4 have been conversing for the past 3 days, so it’s time to broaden our horizons’.  Our table filled up.  We had 8 all together.  The dinner was just about to start when another young couple showed up. 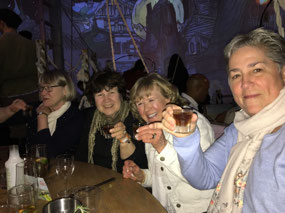 Sainte!
I will admit that my first impression of Helen and Don (not their real names) was not so good.  During the first course, Helen dropped the bread on the floor.  Her and Don talked continuously.  They barely consumed any of the food nor paid attention to any of the entertainment.  Young love...isn’t it incredibly annoying!  The 3 shots of vodka I consumed during the 3rd course emboldened me enough to ask “is this your first date?”.  It was actually their 3rd.  They seemed receptive, so I continued.  “How are you gonna top this evening for a 4th date”.  I quickly learned that their first date was to New Zealand.  Their 2nd was an interactive dinner party that Don arranged himself.  “So”, I said, “you’ve really slacked off then on this date then, haven’t you?”  We all laughed. 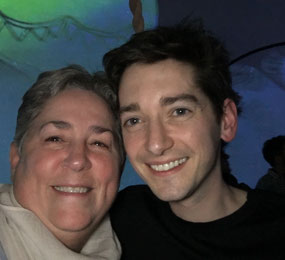 Me and “Don” aka Tom Latchford
What I went on to learn about Helen and Don has restored my faith in young people.  Okay...more so about Don, although Helen is a pseudo celebrity in her own right.  Helen stars as Peppa Pig’s ‘Daisy’ on stage.  Not a big deal to me, but anyone with a ‘little’ can appreciate the importance of it.  Even I can appreciate the fact that she has performed in various productions in London’s West End.  But Don, well he is an amazing young man who just sold a business that he started.  It sold 24 hours previously...and he showed me his new bank balance on his phone.  It exceeded 6,000,000 GBP!  He paid off his mother’s mortgage today and is presenting her with a suitcase full of cash on Monday.  He’s already got a goal for his new venture which is both honourable and likely to double or triple his bank balance.  He treated us to champagne during dinner, he bought us Gin & Tonics at the end of the night, and he then proceeded to pick up the entire bar tab for the 4 of us.  And NO...it didn’t put a dent in his bank balance, but was a much appreciated gesture, none the less.  Needless to say, a little Mountie swag was in order so I gave them each a little something.

Me and “Daisy”
Now Helen wasn’t the only celeb at our table.  Nope, we also dined with Liam Hemsworth’s brother.  Okay...so he wasn’t really a Hemsworth, but he most certainly looked like him.  And the funny part...when I asked him if he happened to be related to the famous actor, he didn’t even know who it was.  He said he would reserve judgement on whether it was a compliment until after he googled him.  In the end, he was best pleased...although questioned whether the prescription of my eyeglasses was strong enough. 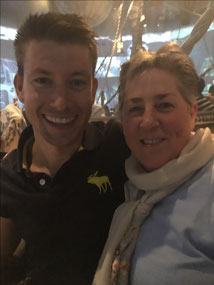 Me and Liam’s brother
We did do other things today besides Gingerline...but really...who cares! 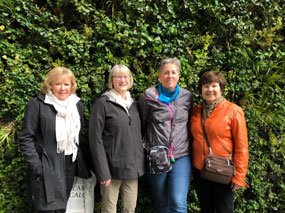 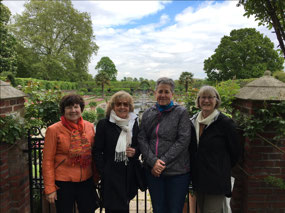 The gang at the Garden 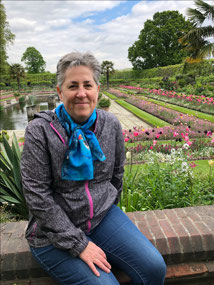 The Sunken Garden at Kensington Palace 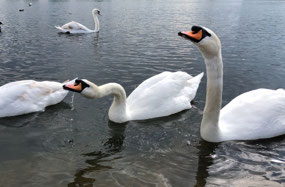 The swans in Round Pond
Other Entries
-

First off...I’ve never seen you drink as much as you’ve described in this post — must have been hilarious! And will you pay the price in the morning? And second off...how did this Gingerlines compare to Chamber of Flavours?

I Know! And to think I started the night with 2 non alcoholic drinks in front of my plate! It was the 3 vodka shots that did it. We were only supposed to have 1 each...but someone left a second bottle on the table...and you couldn’t waste it. How does this compare to COF? Well, mainly, you stay seated in place the whole evening...wel, when you’re not up out of your seat involved in some competition or activity. THe food is still prepared and served in the most unique ways, but without the movement through ‘Chambers’ you have more time to focus on the taste and experience. However, when sitting at a table for 10, you really only get to interact with those seated on your immediate left and right because of the noise level. Which version do I prefer? I think the Chambers. And with regard to any morning hangover...it’s 7 am as I type this, and I feel no residual effects. Apparently good vodka is like that...!!

Katrina, how are YOU going to top a supreme food and celeb evening such as the one you ladies had? It sounds as though your dinner companions made the evening a serendipitous encounter!