-
‘And the mess flew all over the roadway.’  That could be how this story ends...but it’s not.  And the mess is not from a car accident but from my wee small mind being blown...right out of my average sized head. 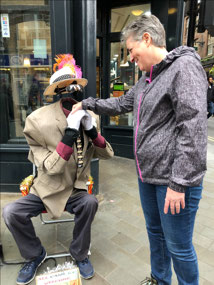 My new friend The Headless Man
There were 2 reasons that our itinerary was modified to replace Liverpool with York.  Firstly, York was more enroute between London and Edinburgh.  Secondly, a British woman that I curl with suggested that we’d love York because it’s such a lovely town with cobbled streets and all.  Sounded quaintly British.  Sounded quiet and lovely.  I was a tad concerned, in fact, that we’d be in town on a Sunday and holiday Monday, and perhaps there wouldn’t be anything going on here.  I couldn’t have been more wrong...thus the reason for the aforementioned mind blowing. 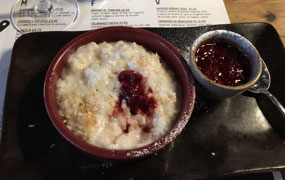 Rice Pudding with Coconut and Raspberry Compote
When we got checked in to our hotel we decided to stroll into town.  We visited the Fossgate Festival which is a pedestrian area filled with various live music, vendors and street food.  We started to notice a plethora of young people, and predominantly groups of young women.  They were all decked out in their little ‘next to nothings’ while we were bundled in multiple layers and gloves.  They all had spike heels, and some were less than steady on their feet.  Based on the various banners the women wore, it was apparent that there were several Hen Parties on the go.  There were also large marauding packs of young men loudly wandering the streets.  They were everywhere. They were boisterous.  They were obnoxious.  They were hammered!! 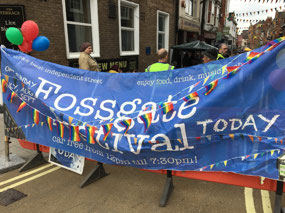 Fossgate Festival
By later in the day when we headed out for the York Terror Trail walking tour, we noticed that the groups of young women in their fancy dress were now carrying their spike heels and walking barefoot on the less than clean sidewalks.  Some were sitting, their short skirts hiked up and their pristine outfits looking less fresh.  You couldn’t walk 100 yards without encountering someone staggering, slurring, and showing signs of intoxication.  It’s Sunday...and it’s not even 8pm yet.  WTF??? 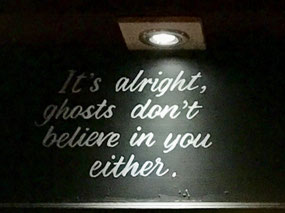 York’s most haunted bar The Golden Fleece
It seems that there are MORE than 365 bars and pubs in York, so you can go to 1 a day for a whole year without repeating any.  This place is geared to partying, eating and drinking.  And it’s far from the quaint LITTLE town that I anticipated.  It’s an absolute zoo here!  The furthest thing from QUIET!! 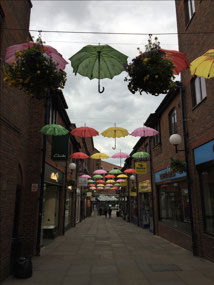 Crossgates Lane
And yes...I know...my age is showing!
Other Entries
-

But how was the Terror Trail? One of those things we’d do and leave Kim in the hotel?!!! Or drag her along with promises of alcohol at the end?!

Kim could have come along cause there were no ghost stories...just true stories that were gory and creepy.

Even better when they’re true...and gory...and creepy...like Burke and Hare in Edinburgh.