-
Only her pilot knows for sure...
What do you do when the routine of the travel portion of your holiday becomes mundane?  You spice it up a bit by flying on the same day as you board your cruise ship.  It’s a bit like throwing the dice and hoping NOT to hit craps!  Could be a recipe for disaster...but THAT’s what makes it EXCITING!
Now it wasn’t a total ‘fly by the seat of your pants’ decision.  We did closely watch the weather predictions and were open to paying the fee to reschedule if things looked dicey.  And the main factor in our decision was this...we are avoiding the black hole of the Montreal Airport.  Things ALWAYS go sideways when traveling through that place. 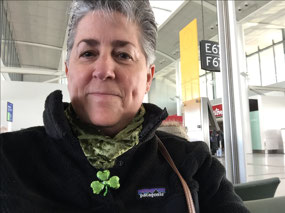 I got my Irish on!
So imagine my surprise when we arrive in Toronto this morning on schedule.  We have 2 hours between flights so lots of time to reclear security and then pass through the requisite US Customs and Immigration.  We get to security and there’s hardly anyone.  Wow!  We clear through the baggage clearance area without the usual delays.  As fast as you can say ‘Bob’s yer uncle’ our Nexus card gets us through the US rigamarole.  We’re at our gate with a good hour to wait.  And then....the wheels fall off.
We’re supposed to board at 10 a.m. for a 10:40 departure.  We’re due to arrive in Lauderdale at 1:45 p.m.  A short 10 minute taxi ride and we’ll be at the pier.  Departure is 4 p.m.  Beautiful sunny skies and cool, crisp temps would indicate that there is is ab-so-lutely no reason for any delays.  I mean REALLY.  WHAT...COULD...GO...WRONG??
And then it happens...the gate agent gets on the PA system and tells us that the computers in US Customs and Immigration have gone down.  Who knew that the traveling public in Canada have to come to a complete and utter standstill because Trumpy’s people have no computers.  What did they do BEFORE computers?  Is there no contingency plan for such an event?  And the answer to that would be ‘no...hell, no’.
So the computers go down, you say.  So what, you say.  I know you’re saying it, cause I said it too.  Apparently a crew member was on the wrong side of the ‘border’ when the computers went on strike.  One...measly...crew member.  Hell!  I would have volunteered to serve drinks if it would speed up the departure.  I mean face it...it’s a Rouge flight...the service is somewhat iffy at best.  Even I can do ‘iffy’!
We’re delayed...then we’re delayed again...and again...and again.  Our arrival time into Lauderdale is getting later...and later...later.  Time to bite the bullet and call Princess to advise them of our delay.  Then I call again...and then I call again, with each further delay.  Who knew that when the ship is scheduled to depart at 4 p.m. that it doesn’t mean you have until 4 p.m. to board the ship.  News to me!  Nope, you have until 3 p.m. to board.  Our flight is now scheduled for a 3:15 p.m. arrival.  That spells ‘SOL’ to me...that’s ‘shit outta luck’.  I’m left with the instructions to call in as soon as we land to see if there’s any need to taxi to the pier. 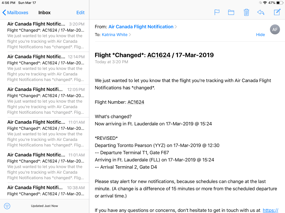 A few notifications of our flight delay
We finally board at around 12:10.  As luck would have it, someone doesn’t show up, so now we have a further delay as the ground crew crawl around the belly of the plane looking for some jackass’s suitcase.  No doubt it’s non descript black with no identifiable markings, cause it seemed to take them quite awhile to come up with it.  But then again, it was a full flight...well, full save for that one dude who opted out at the last minute.
We’re wheels up by 12:30 for what I imagine is going to be 3 wasted hours of my life that I’ll never get back.  The alternative of flying to St Thomas at my own expense to pick up the ship on Wednesday is just not gonna happen.  No doubt it’ll be a matter of picking up my suitcase off the carousel, dragging it over to the check in counter and booking myself out on the next plane heading to the east coast.  But I’ll play this silly little game because I’m assuming it’s all part of the process to make a claim to my travel insurance.
I’m on the phone as soon as the wheels hit tarmac.  It’s now 3:30 p.m., and 1/2 hour BEYOND the final boarding time.  There isn’t even a glimmer of hope.  And then, b’gosh and b’gorrah, those Irish eyes start to smile down upon us.  I’m told there are several passengers on the plane, so the captain will hold the gangway in place until 3:55.  Hmmmm....we now have a glimmer.
As we land the ‘Rouge Crew’, as they like to refer to themselves, (I might have just vomited a little in my mouth), announce that there are some people on the ship who are late for a cruise, so if you aren’t in any hurry to disembark, could you please remain in your seat.  Well, as soon as the seat belt sign is extinguished everyone on the plane rose to their feet and got out in the aisle to block the quick exit of the cruise passengers.  Well, everyone save for 3 olds...and the only reason they didn’t stand up was because they were wheel chair bound so needed assistance to deplane.
We race to the luggage carrousel and encounter a Princess staff member who is there for a few people who have paid for airport to ship transfers.  We, unfortunately, did not book those this time.  Her advice to us...just leave our suitcases behind and immediately take a taxi to the ship.  There are no words to describe to you the look on my face when she suggested this.  I just asked her “you mean go without my clothes?  And just wear what I have on for the whole week?”, to which she replied “well, it’s better than missing the ship, isn’t it?”.  Surprisingly enough, I bit my tongue.  There was no way on this earth that I was going on a cruise with only the clothes on my back.  NO...CAN...DO!
It’s a total gamble, because it’s now 3:45, but we wait for our luggage.  It comes relatively quickly and off we go to the taxi stand.  The Princess employee is out there herding people into cabs.  I wave to her.  She remembers me.  She is just putting another couple into a cab, but stops the driver and loads us in with them.  “Fast” she tells him, and by jumpin’ jeezes, he listens.  He doesn’t speak much English, but he understood the word fast. 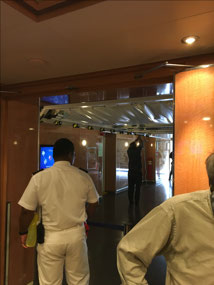 The gang way being retracted just behind us
We pull into the cruise terminal and more staff haul us out of the taxi.  They lead us in through security, push us up the gangway.  WE MADE IT.  Then there’s the beep, beep, beep of the gangway being retracted....right behind us.  We are the last 4 to board.  There are tears in the small deck area...and surprisingly they aren’t mine.  A couple of elderly women were traveling with friends...they didn’t arrive in time.  Several didn’t.  We left without them. 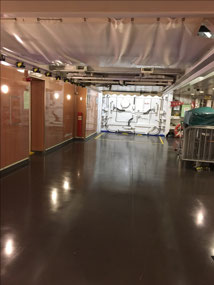 Thankfully we’re on the right side of the door
And for those of you that are thinking ‘that’ll learn ya...leaving the day of to catch a cruise’.  My response to that is that the Newfoundland couple who we shared a cab with left YESTERDAY!
As a firm believer in ‘everything happens for a reason’, I’m certain that there was someone who wasn’t meant to be on this ship.  Luckily enough...it wasn’t me! 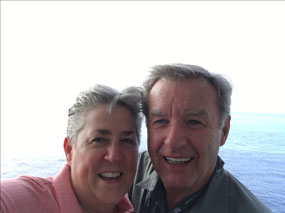 MADE IT!!!
Happy St Paddy’s Day everyone!!
Other Entries
-

Jesus, Mary and Joseph...as my dear old dad would have said! It was like reading a suspense novel! Well done you two, glad you made it! Have a great trip!

So happy you made it. What a stressful day

Well done, indeed! The real reason you made it on board was so that those of us still with snow up to our ears will have some good reading over the next number of days. Smooth sailing for the rest of the journey.

The luck of the Irish...