Some days it just writes itself...

-
As cruise days goes, today was what I would call perfection.  For starters, Sint Maarten is my favourite Caribbean island cause we get to visit our favourite jeweller, Henry.  The temperatures were beautiful with the odd sprinkle to cool things down, and lots of fluffy white clouds to occasionally block the burning hot sun. 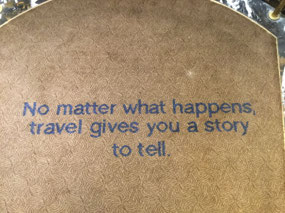 Ain’t THAT the truth!!
With only 2 ships in port, the downtown wasn’t overly busy.   Henry sent us a water taxi voucher, so we didn’t even have to make the long walk into town.  Yay!  Sint Maarten, like St Thomas, is still rebuilding after the affects of the hurricane 2 years ago.  The downtown strip in Philipsburg is still showing signs of damage with several shops still boarded up.  Again, the people in the hospitality industry thank you continually for coming to the island because they still cannot accommodate land tourists like they could before the hurricane. 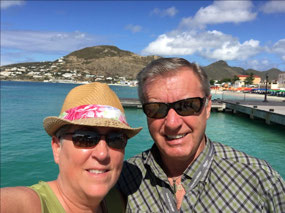 On the pier in Philipsburg
To top off my visit to town today...I won $100 at one of the little casinos.  So, to do my part at helping the economy, I purchased a lovely Swarovski bracelet from Henry’s shop.  I’m not really a jewellery person, but it seemed the right thing to do to leave the winnings on the island.   Not to mention a tidy little deposit into the ‘karma bank’...right Shelley! 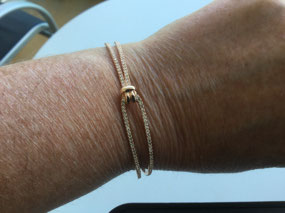 My ‘good karma’ bracelet
The afternoon was spent by the pool as it was relatively quiet with most people gone ashore on tours.  The water was nice and warm and clean.  There was no visible scum of residual suntan oil on the water, which can sometime be a problem after a few days on the ship.  And it was just all around pleasant.
This morning, on the other hand, I had a bit of an unpleasant experience.  Well, it’s not something that actually HAPPENED to me...but one of those things that you just wish you didn’t have to see!  The breakfast buffet...always an experience...and usually a great place for people watching.  This morning was no exception.  Now, the cruise line uses cloth napkins and they roll your cutlery into each napkin to make a convenient little roll.  You pick up your food at the buffet and then you find a table.  There are convenient little napkin rolls in the middle of every table.
SPOILER ALERT....don’t read the following while consuming a meal...
Today we were seated quite close to Sherman and his wife...they were just finishing up their breakfast.  Now, Sherm and his wife are not old.  They’d be maybe late 40’s, or early 50’s, not your typical fossil.  Which is why what happened next both surprised AND repulsed me.
I’ll admit, there have been times when, in order to prevent the spread of germs, I have coughed into my cloth napkin.  I’ve even had occasion to sneeze into it, but I draw the line at that.  Sherm, on the other hand, has no qualms whatsoever about doing THINGS with his cloth napkin.  He blew his nose, and by blew his nose I don’t mean a delicate little snort.  Nope, it was the biggest, loudest, and based solely on the sound, messiest of blows.  And if THAT wasn’t enough, he proceeded to ‘mine for gold’...or brain cells, but I’m gonna bet the former because I’m thinking there aren’t too many of the latter.  Who DOES THAT?  Now Kier said it’s no different than someone using a hanky.  I beg to differ.  For one thing, hankies are totally ‘out of vogue’ and for another, when you use a hanky you are fully aware that you will be washing it yourself...well, someone in your household will be.  But to fill a cloth napkin with ‘that’ and then hand it to some poor unsuspecting wait staff to deal with...totally UNCOOL!  Shame on you, Sherm! 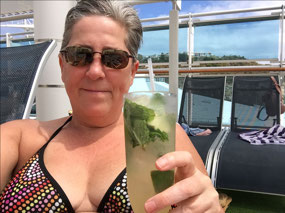 Cheers! It’s a ‘No-jito’...meaning ‘no-alcohol’!
comment
Things are winding down.  We’ve got 2 sea days left and then we’ll be punted off in Fort Lauderdale.  Where HAS the time gone??
Other Entries
-

You definitely added to your karma bank! Wear that lovely bracelet to remind yourself to make frequent deposits! As for the other topic in this post, not gonna even go there.

Love the bracelet! Enjoy the nice weather cause we are in for high winds and heavy rain tomorrow!

Love the photos you both look fabulous and I absolutely love your bracelet. Enjoy every moment

Fabulous bracelet! Great for dressing up or dressing down! That drink looks pretty yummy too! Enjoy your last two days!