Tonight’s show...will be in the dining room!

-
People, people, people...they never cease to amaze me...and I mean that in the most amusing way! 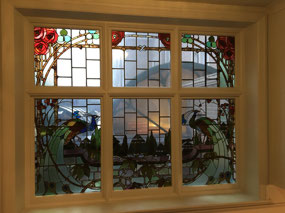 Just noticed this leaving our hotel today
comment
We traveled from Bournemouth to Southampton today to board our cruise ship.  We booked a train ticket for the trip, and as luck would have it, the trains weren’t running today.  They brought in a bus, a big double decker bus...and charged us what a train ticket would have been.  Now, had we WANTED to travel on a bus, and booked the bus, we would have gotten the ticket for £5 less...plus we would have had the benefit of a luggage hold underneath.  The double decker had no luggage space, and being that we were near the last to board there were no seats on the lower level.  They wanted us to carry our suitcases up the narrow staircase to the upper level.  ‘No can do’, I told them.  And yes...there may be an email written! 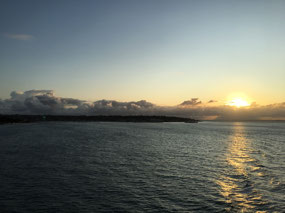 First cruise sunset
Boarding was relatively smooth and quick...if you overlook the couple who got to the top of the escalator in the terminal and decided that was the perfect place to stop and fuss with the handle of their small suitcases.  By itself, not a problem, but when you factor in a long line of people coming UP the escalator behind them with no place to go...we almost had a domino effect disaster.  Just another example of people having no awareness of what goes on around them.  Like the couple who came into the 800+ seat theatre where there were about 35 people in seats, and they had to pick the row AND the seats directly in front of me.  Not 2 to the left or 2 to the right...nope...gotta sit DIRECTLY in front of me.  And that didn’t happen just once...but twice.  The second time the woman looked right at me, went to pick a seat that wouldn’t block my view, but changed her mind and sat right in front of me.  REALLY!!!!  That’s not unaware...that’s just inconsiderate. 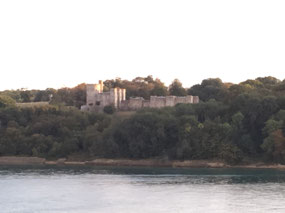 Castle on the way out of Southampton harbour
Turns out our dining room is going to be the best place to be for entertainment on this cruise.  It’s starting off interesting, anyway.  We are at our usual table of 2, surrounded by a lot of other tables of 2, in a little separate area with a window.  To the right of us are Mr. and Mrs. Milktoast.  They’re very quiet and unassuming.  To the left of us are Mr. and Mrs. Arizona.  The kind of people who choose a table for 2, but then want to chat with their neighbours.  Ahem...could be a reason we chose a 2 top?  Could be we don’t WANT to make ‘social’ at meal times.  And over on the other side of them, just up from the window is a couple we’ll call (for no apparent reason ;) Mr. and Mrs. French.  And this is where the story commences.
We’ve just settled in nicely for our meal.  The ship is setting sail.  The sun is starting to set.  It begins to shine in the window nearby, or it’s reflecting off something outside.  Whichever, it has caused some discomfort for Mrs. Milktoast, who asks the server to close the curtains, and he does.  And then...mayhem ensues.  Mr. French immediately kicks up a fuss and asks in his broken english why the drapes were drawn.  The server tells him that the sun is bothering someone’s eyes and points over towards the Milktoasts.  This doesn’t work for Mr. French.  He states, very loudly, that if the curtains are going to be drawn then he’s going to ask for another table and won’t be back to sit there tomorrow.  French goes on to comment something about not liking the sun and why are they on a cruise to Florida.  French gets louder, Milktoast is ignoring it, or quite possibly is oblivious.  The server says to Milktoast that he’ll just check the window and maybe the issue has passed.  He looks and deems it ‘safe’ and re-opens the curtains.  Mrs. Milktoast is fine now.  Mr. French...not so much...and now that the drapes have been re-opened Mrs. French decides to weigh in.  The 2 of them get louder and keep going on and on about the window and why is it there if not to have the curtains open and to see outside.  Blah, blah, blah.  Billy Whiteshoes Johnson and his wife of 67 years are seated behind us with their friends.  Billy gets up and speaks to Mrs. French about the window...she claims her english isn’t very good, so Billy smoothly switches to french to speak with her.  Mrs. French is now so thrilled that someone speaks her language, she FINALLY forgets to complain anymore about the window that has now been re-opened for 15 minutes.  Thank you Jesus...AND Billy Whiteshoes Johnson!!! 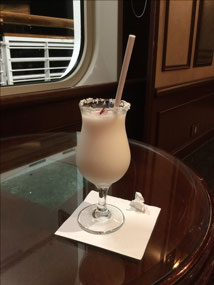 First (and last) FREE drink on the cruise
Stay tuned as there are bound to be more in the saga of the Milktoast’s, the French’s, the Arizona’s, and the Johnson’s.  Ya can’t make this shit up folks!!
Other Entries
-

How many days is this cruise? If I hear any of the above mentioned names being murdered in the middle of the Atlantic Ocean..., I will be wondering!!!

The highlight of BOTH, Shelley!

Absolutely my LOL for the day! Cannot wait for the continuing dinner saga!