If the ships a rockin’, you’re not a stoppin’

-
Rude awakening by the captain this morning with an ‘in cabin’ announcement.  You know it’s bad news when the announcement is piped into your cabin.  Most on-board communications throughout the day are made in public areas only. 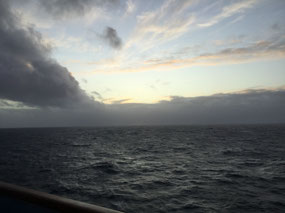 Definitely not as calm as it looks!!
I wasn’t REAL worried when it came on at 7:15.  I mean, yes, the ship was rocking pretty much steadily since the wee hours, but not sufficiently to warrant a ‘to the muster station’ announcement.  But then...just prior to the announcement I heard running in the hallway...and trust me, with the demographic of this ship’s passengers...it was NONE of them!!  And since I saw the nurse traveling the deck yesterday with a list and a thermometer, I figured it was just a medical emergency of some sort.  Aging population + lengthy cruise = lots of work for the medical staff.
So the announcement was that with the gale force winds and high swells, it wasn’t safe to dock in Portland...so...we’re skipping that stop and continuing on to Le Vernon, France.  Not sure how that factors in when we’re not spending 8 or so hours in Portland and yet still arriving at the scheduled time in France.  Oh well, maybe the poor weather is slowing us down.  Unfortunately, Portland is one of the ports I was really interested in seeing.
It’s been a day spent pretty close to the cabin.  The captain said the ‘uncomfortable swells’ would stop tonight, but at supper time he announced that it, in fact, would worsen tonight and last all day tomorrow.  It was so bad that I figured we’d be a small group at supper, but most of the usuals were there except for Billy Whiteshoes, his wife and friends.
The French’s were a tad annoying tonight.  Mr and Mrs kept carrying on very loud conversations, feeling secure, I’m certain, in the fact that the Whiteshoes’ were absent and they are really the only ones that can understand what they’re saying.  I did have a few moments of flashback when Mrs. French kept repeating ‘Exactement!’.
It was November 1986 in a classroom in Montreal.  We were 8 women until the powers that be needed to find a placement for a 40 something man from the Port of Montreal who was on a time crunch to learn french.  It was decided that his current level fit him right into our class.  And where did he sit?  Right beside me.  His name was Enos...he was the thorn amongst the roses.  He was annoying as hell and quickly earned the nickname ‘Enos the Penis’.  His favourite word in class...’Exactement!’, said with the same level of enthusiasm as Mrs. French this evening.  Ooohhhhhh, the flashbacks!
It’s been an early evening because things are rocking so much that venturing too far from the cabin is really uncomfortable and dangerous.  Luckily there are lots of movies on demand.  Tomorrow may not be any better, but that’s the one guarantee you have with weather forecasts...no prediction is ever guaranteed.
Other Entries
-

I shudder to think how much puking is currently taking place aboard your ship!

Ugh...feeling slightly ill just thinking about it. Ik. Gotta ask ...how did Billy whiteshoes get his moniker? White socks with sandals? Lorie and I quite like that name

Valerie, Billy ‘Whiteshoes’ Johnson is from Florida, and he seems to have a shoe fetish. His wife even announced in our little area that he has more shoes than she does. He always wears a different pair, although they’re not usually white. And I should note...he has absolutely NO resemblance to the REAL Mr. Johnson who is a retired football player.