With dates picked we then booked flights and, by all accounts, are both fairly satisfied with the prices we paid 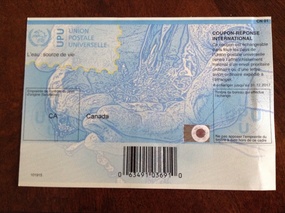 The necessary postage
. So, what's next? Well, this is where the research begins. Figuring out what there is to see, of that, what we each deem interesting enough to see, and how we divide up our time between the three or four countries.

My first order of business was ordering tickets to see the "Ceremony of the Keys". This is a little advertised free event that I saw about 5 years ago. It is a 600 year old tradition of locking up the Tower of London. It's not a long ceremony, but it is filled with history and tradition...and...it's free. It is probably not as little known now as it was back then, but still requires the old fashion hand written and snail-mailed request for tickets. And the most difficult part of the process for me was remembering how I tackled the requisite "self addressed stamped envelope". I knew I did it back then, so after 2 trips to the post office, I came away with the "Coupon-Response International". A short letter outlining the required information and it's off in the mail 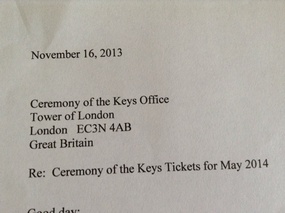 jpg
. Two months notice is required for ticket requests, and 3 if the months of June, July and August are sought. Our 4 months notice should be more than sufficient. We had our choice of 2 dates and hopefully we will be accommodated with one of them. Now it's time to sit and wait...and research...and plan...and book...and book, and book some more.

Oh, and there is one other small thing I did a week ago. I found out that there are occasionally tickets available to tour the castle where Downton Abbey is filmed. As a newly converted Downton fan, I had to be sure to secure myself one. And, as luck would have it, they just announced the opening dates for Highclere Castle on November 3rd. And as more luck would have it, there were 3 dates during my scheduled visit over (which was only supposed to be 5 days at that time). I waited, and watched the first available date quickly become fully booked. I decided I could wait no longer, so booked myself on the last available date. Unfortunately, by the time Fay had decided to come on the trip with me, my time slot had been sold out as well. But, there will likely be something to do in the small town of Newbury where the castle is located. For any Downton Abbey fans out there, you'll know what a real coo this is! I mean, it's ALMOST as exciting as touring the Granada Studios, which is home to Coronation Street...yeah, really!!
Other Entries
-

Awsome I am excited