-
What happens when you've had such a fabulous first day of holidays that you don't think it possible to better it? Do you quit and go home early? Nah, you just try harder. We started the day with a fabulous 2.5 hour walking tour of Westminster. What a great time we had and our guide was a fellow Canadian. Although a bit cool, it was a most enjoyable walk. And did I mention it was a FREE tour? Jessica had such interesting stories. It made me realize that I must have slept through my entire high school history curriculum. Had my teachers made history that interesting, I wouldn't have dropped it as soon as I could. Jessica earned the generous tip I gave her! 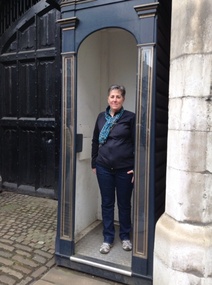 In the Guard Hut at one of Diana's old residences
. I was in a very lengthy check out line with my very pricey collectible commemorating Prince George's birth. I thought to myself "This is worth every penny of the fifty some odd Canadian dollars it's gonna cost me. Yes, it will be worth much more than that one day. How long before I can actually cash that in for big bucks? Well, let's see....hmmm...it'll likely be a good 50 years before Prince George becomes King George, if not more. Where will I be......waaaaiiiit a minute...I'll be dead before it has any real value". So I did what any sane person would do and ducked under the que guide and dropped it on a shelf nearby. But I didn't leave empty handed...I found some licorice in the candy store. Yup, I know what you're thinking...didn't I buy licorice in Fortnum & Mason's last night? To which I'd reply...yes...so!

Lastly, but not leastly...this evening we spent at a musical called "The Book of Mormon". The reviews around London rate it as the BEST musical of the Century. Pretty tall order, I'd say. But hot damn, it they aren't absolutely, 100% accurate! Now, take heed...if you're faint of heart or have delicate sensibilities, then this is NOT for you. If you've got a dark sense of humour and don't shrink away from curses or controversy, then step up and get in line. You won't be disappointed!

All in all, we had a fantastic day...from start to finish...and it was reflected in Fay's entry into the Condolence Book at the Diana and Dodie Memorial at Harrod's when she wrote "London Rocks!". I'm sure Diana got a chuckle...as did we after I told Fay what she'd done. In her defense, she wasn't the first to add such a touching(?) sentiment.

Congratulations on coming to your senses and trashing the "trashy" souvenir!!

Hey You two look so good! Kat thank You for the awesome blog. Have a great time and stay safe.