A Day at Downton

-
Today was the day we Downton fans have been waiting for...the pilgrimage to the homeland...Highclere Castle. It was a short hour long train ride from Paddington Station to Newbury and then a 15 minute taxi ride out to the country. The castle looks every bit the way it does on television and I walked through the gardens and several of the rooms that were familiar from having watched all 4 seasons. I must say, though, I was a bit disappointed at how little emphasis was put on the Downton Abbey tie in. There was much too much information, for my liking, about the Earl of Carnarvon. After all, I was there to see where Pamuk died, the stairway and upstairs that the tarty chick lured Branson, the "fancy eating room" where all the dining room scenes were shot, not photos of the Earl and his family. GIve me the Earl of Grantham...not that real life Earl of Carnarvon. I will say, though, it was very interesting to learn that the Earl of Carnarvon financed the Egyptian excavation that discovered King Tut's tomb, and there was an entire exhibit devoted to that. The gift shop was also nice, with a wide variety of Highclere souvenirs, but not many that were really connected to the show. In my opinion, someone was missing out on the gravy train called Downton Abbey. They certainly could be capitalizing more on the popularity of the show. Oh well, it was something to see, and now when I watch Season 5, I will be able to say "I was there" when all the scenes at Highclere are shown. And I'll have to recall it all with the mind's eye, as no photography was allowed inside the castle. Guess they thought that was the best way to flog their Highclere Castle Guide Book with all the glossy colour photos of the Castle. I didn't bite...on the book...but maybe on a few other little trinkets ;) 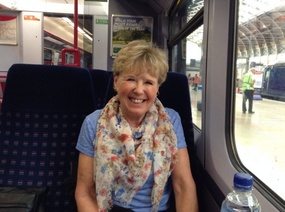 The Great Western train to Newbury
. What a great place. It's not really all that small with a population of some 45,000 and has shopping and pubs galore. Unfortunately, most tourists miss out when they travel directly from the train station to Highclere Castle and never experience what the town has to offer. When you travel all that way, you may as well take it all in! And we were glad we did. The town is walking distance from the train station, so very convenient. There's an indoor and outdoor mall. And a TK Maxx...yes, you read that right TK, not TJ. What more could one want??

It's time for us to pack now and prepare for tomorrow's train ride to Paris.