-
What a smooth and enjoyable trip from London to Paris on the Eurostar. We scored the center seats in Car 5, so were sitting face to face with a table in between us. We had a nice old couple from somewhere in England sitting with us for the trip. It was a smooth crossing with little of note until we arrived in Paris North terminal. We were working our way to the taxi stand as our hotel wasn't too far away. A woman came up to us asking if we wanted a taxi and we said yes. In hindsight, Fay and I both knew the woman was a Romanian...a gypsy...that should have been the first clue to walk away. The second clue to walk away should have come when she took us in the opposite direction from where we were headed. We did stop to quiz her a couple of times as she lead us through the terminal. She advised the taxi would cost around 12-15 E plus a 10 E "reservation fee". When we asked what the taxis out front cost, she said they were "big business" and they would cost 120 -130 E. That should have been the straw that broke the camels back. We KNEW no taxi from the train station to our hotel would cost that much. More like 10 - 12 E. Anyway, for some reason unknown to man, we continued along with her and she proceeded to take us out another station door and to another taxi line where no one was waiting. Then she said "You pay me 10 E now"...and the lights came on. She was scamming us for a "finders fee". Basically taking us to an area around the terminal that had taxis but no lineup of people. She told the taxi driver at the front of the line that she had been paid 10 E and that he shouldn't charge anymore than 15E...at least that's how I think the conversation went with my limited french. It all around left a bad taste in my mouth...but we know we have no one to blame but ourselves. We both felt something wasn't right, but we followed along anyway. So what did the taxi driver end up charging us you ask...well, with tip (yes, we did tip him cause we don't know for sure that he was there...you know...in that place, the place called cahoots!) 12 E. So without having to pay that "finders fee", it would have been an extremely reasonable trip.

LESSON #1 - don't go with a gypsy women in the train station who claims to have a taxi company, and then wants to charge a "reservation fee" for finding you a line of cabs at a different station door 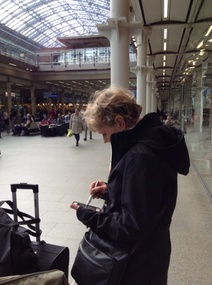 getting caught up on the news
. I guess we could have stiffed her...but who knows...the cab driver MAY have been "in cahoots" with her. And, trust me, "in cahoots" is not a place you want to be when you don't speak the language!! :(

We have a conveniently located hotel on the edge of the 9th and 2nd arrondissement. When we checked in we were told not once, not twice, not three times, but at least 5 times to be careful of pickpockets when out and about.

LESSON #2 - don't let the paranoia totally ruin your visit. We headed out tonight expecting an encounter at every turn, but there wasn't one time that we felt threatened by anyone. We are quite careful and usually stay with the flow of people, never venturing too far off the beaten path.

We were out for a walk and are finding things quite close by. We had a stroll by the Seine tonight and had a nice meal near Notre Dame Cathedral. We are starting to feel a bit more comfortable here after a bit of a rough start. Tomorrow we have a free walking tour of Paris, so that will certainly help us get our bearings.

Beware the "found diamond ring" scam that the gypsies pull in Paris all the time. Hate to sound like I'm racial profiling but I've been told about it by several different reliable sources.

And we were told of it to...by the hotel desk man. When I told him of our "taxi finder's fee fiasco", he added the diamond ring scam story. These gypsy families just live on the sidewalks. They have a mattress and their kids with them...quite sad really. Oh well, I made my "contribution" at the airport...they'll not get anymore from me! But she did give us each a Paris map as part of the "service" at the airport. We affectionately refer to our maps now as the "5 euro map"!