What I learned today in Paris

-
We had another full day here in Paris and did we learn a lot! Of course we learned all that historical stuff that you would expect on our 3 hour walking tour, but we also learned some things on our own that may not have been "tour worthy", but were definitely interesting. 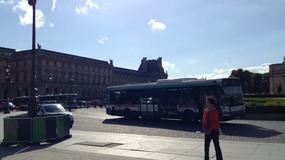 This place is HUGE!
. We saw some photographing them this morning. The bins look a bit like strange pods from outer space, so perhaps these tourists were expecting little green men to pop out of the big green pod. Should that have happened, they would have been well positioned to video it for Youtube or whatever is the Chinese equivalent.

2) Even the destitute here in Paris have the money for cosmetic surgery. Or perhaps it was the amount of cosmetic surgery that caused this particular woman to become destitute. Either way, she was in her 70's or thereabouts, and was wandering around aimlessly this morning looking for...I'm not sure what. Unfortunately, her face had that look of excessive work...with not all of it being entirely successful.

3) Many of the homeless here in Paris still can scrape the funds together to have cell phones. Who they call, or where they receive their bills, I haven't figured out, but we saw three men lying about in sleeping bags and comparing cell phones 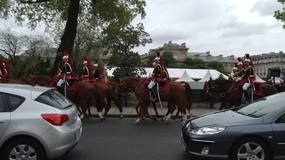 Celebrating VE Day with longest horse parade EVER!
. Maybe they were just discussing their spam problems...or trying to decide which corner to have their pizza delivered to. Either way, I don't own a cell phone, yet the homeless in Paris can afford one. What's wrong with this picture?

As I mentioned, we did a very long, and very interesting walking tour in Paris. Our guide was hands down THE BEST guide I have EVER had on a tour, bar none. His name was Paul and he owns Wego Walking Tours in Paris. He looks like Fidel Castro, acts like Howie Mandel and is smart like Sheldon Cooper. I would highly recommend anyone to take this tour. It's a free tour and all you do is tip the guide whatever you feel it was worth. We walked 6 km and started at Notre Dame Cathedral, ended at the Eiffel Tower and saw almost everything in between. Tomorrow we will head back to some of the places he highly recommended. We also got some tips on beating the lines at the Louvre, but in keeping with Paul's wishes, I won't publish the trick here. If you're heading to Paris and would like to know the best way to beat the lines at the Louvre, just email me and I'll send you the info.

And did I mention it was another bank holiday today? Who knew? Lots of crowds around for sure, but the rain we received this afternoon seem to send them all home early. The holiday was in honour of VE Day and the end of the war...WWII I'm guessing, but when you've been involved in as many wars as France, you just can't be sure! Anyway, there was the looooongest horse parade I'd ever seen (I've attached just a short video clip of a small part of it) that was headed to the Champs Elysees where the President was speaking. He was gone by the time we arrived in the area....hmmm....obviously didn't realize we were coming!!

How do you find the people of Paris? Will you be staying for Kim and Kanye's wedding ;)

So far we've only encountered one rude waiter, but everyone else quite helpful. I guess our invite to the double K wedding went by way of our previous invites to tea with the Queen and dinner with the French Prez...ya know, lost in the mail!