Yes we can can and we did did

-
Today was full of sightseeing, souvenir shopping, picture taking and, of course, the Moulin Rouge. We redid the majority of yesterday's walking tour, but this time taking time to stop on the Pont des Arts, the Louvre, and Pont Alexander III to take all those cutesy tourist pictures that you just have to do when in Paris. You know the ones...locking your lock on the bridge, picking the glass pyramid up at the Louvre, and holding the Eiffel in the palm of your hand. We also practiced our negotiating skills by dealing with one of the street vendors at the Louvre. Both Fay and I came away with a bag of swag plus a couple of freebies thrown in. We even walked the Champs Elysees, but got better prices from our friends on the street around the Louvre. 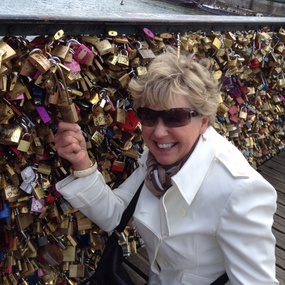 Fay and her lock
. I even had another of those lovely warm chocolate and banana crepes for lunch. Hey, when in Rome... I mean, when in Paris!! I've never really been a pancake person, but somehow, when they're slathered in chocolate and stuffed with bananas, they're irresistible!

We headed over to the Moulin Rouge around 8:15 for the 9 pm show. We thought we were too early, but noticed some people lining up outside. Not knowing if the seats are pre-assigned or not, we were concerned with being stuck in the "nose-bleeds", so got in line. The line went really quick and we were inside before we knew it. We ended up with pretty good seats, although they do jam 6 into a table which would be more comfortable seating 4. We got a full bottle of champagne to share between the 2 of us and polished it all off, except for about 1 glass. Because our friend Susan wasn't able to come with us on our trip, and the Moulin Rouge wouldn't refund her ticket price, they offered us a credit note to be used at the performance 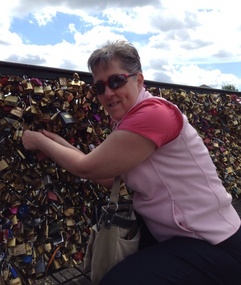 Me and my lock
. When I suggested we would get more champagne with it, the man looked at me as if I had 2 heads. He didn't think we'd finish the bottle we had, and it seems he was right. We took the credit in the gift shop and left there with a bag of swag as well.

About the show...I would describe it as a variety show, very much like the Rockettes only without the same level of choreography. Oh, and I forgot to mention the added boobs. Yes, lots of boobs at the Moulin Rouge, however, all done quite tastefully. There were small boobs, smaller, boobs, the absolute smallest boobs, and 1 pair of what I'd call relatively normal boobs. There were men in the show as well. They kept all their clothes on to the tune of "that's a double standard". Mind you, they were really only there to keep the audience entertained while the women changed costumes. And there were LOTS of costume changes. I will say, the bright and colourful costumes plus the equally colourful sets were what made the show so eye catching. The music was, of course, predominantly in french, and I really think the songs were all lip synced. Although some of the performers wore head mikes, their lips didn't always move with the song. They had a ventriloquist there who was quite humorous and did a lot of his act in english. He was no Jeff Dunham, but was quite good and had a little bit of audience participation. It was an enjoyable show that I would recommend anyone see once. No real need to see more than that unless you know someone in the show; you want to know someone in the show; you want to be in the show; or you like snakes. Yes, you read that right. I DON'T like snakes one bit..yuck!

Well, tomorrow is our last day in Paris before heading on to Brussels, so we have a couple of sights left to visit that were too lined up today. Maybe, if we're lucky, Saturday morning will be quiet...queue wise that is! 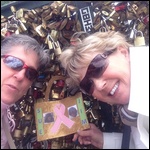 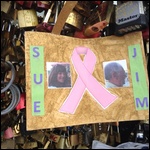 Now I know why you take such a huge suitcase -- by the time you come home it's no longer luggage, it's a bag of swag!