Just when you think you've seen it all...

-
Our last day in Paris and we did it up in fine style. We had a late start so just grabbed a nice french pastry for breakfast, then made our way to our token church visit. We elected not to do any of the popular ones in London, and skipped the zoo known as Notre Dame Cathedral here in Paris. However, when our tour guide Paul recommended Sainte Chapelle, we opted to check it out, and I was very glad we did. Upon entry, I was incredibly underwhelmed until we found the stairs to the second level. Well, let me tell you, the stain glass was every bit as amazing as we were told. Shelley, you'd have loved it. In fact, take a look at the attached video, and see if you can reproduce a panel or two! 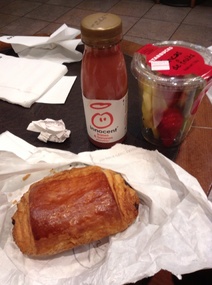 Love those calorie free pastries!
comment
. Unfortunately, it was raining a pour here today, so not the best day for a boat ride. We had little choice, though, and the boat was covered, so it wasn't too miserable a trip. It was also a very good way to see the Eiffel Tower relatively close up.

After a late lunch, we finished up our souvenir shopping and headed back to our hotel to get packed up. Enroute, we wanted to stop off and pick up some bread and cheese to have a light supper in our room. Alas, as has happened so many times here in Paris, we got turned around and couldn't find the street which had the market we had passed earlier in the day. Well, what we did stumble upon left both Fay and I slack jawed. Good thing I had my sunglasses on, cause my eyes were like saucers. From everything we had read, the sex trade area was supposed to be up in the area of the Moulin Rouge. When we were up there last night, we didn't wander too far for that very reason. Imagine our surprise when we stumbled onto rue Blondel where there were more hookers lined up than you could shake a condom at. We were half way down the street before we realized where we were. I saw this elderly woman close to the end of the street and thought "gee, that poor woman is stuck living here on this street with all this going on around her", and then I saw her blouse unzipped to her belly button, and her very ample bosom pushed up to her chin...not a pretty site! They were all shapes and sizes on that street, and certainly not what you'd call high class. These had to be the down and outers. I mean really, how many horny men with a granny fetish would be out at 5:30 pm looking for a little action? It kind of reminded me of one of my father's old sayings..."you hate your eyes for seeing it"!

As Fay pointed out, our trip here in Paris had an odd start what with our little Romanian scammer and all, and now it's had a strange end with the parade of pros that were well past their sell buy dates...but everything in between was great.

Au revoir, Paris. We'll miss you...but not so much your gypsies and hookers, though!! ;)
Other Entries
-

Don't think I didn't want to circle the block and "stumble" onto the street a second time with my camera out...but I valued my teeth, hair, and eyes...all the vulnerable areas in an old fashioned cat fight...which I wasn't sure I would win up against some of these old rounders!