-
What do you do on your last day and night in London? Well, you can't go wrong with shopping and musical theatre. We arrived back in London around noon and after a couple of trips around the block, we were able to find our hotel. It's adequate at best and a bit cramped at worst. The woman who seems to own/run the place MUST have a sister who works in the Paris train station...scamming tourists...cause this hotel woman was a bit of a scammer too. She tried to over charge us, but I wasn't letting her away with that. I can't wait to see what breakfast will consist of. It's SUPPOSED to be a full english. We'll see.

We dumped our bags and headed out to my new favourite department store, John Lewis 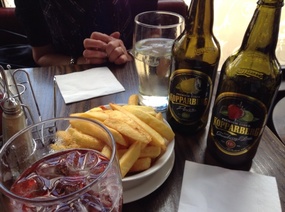 Chips and Cider...life is good!
. We also stopped at a really interesting area off Regent Street called Carnaby Street. It's chock full of unique shops that you don't see anywhere else, plus it is so much quieter than Regent that it's worth the walk there just for a break from the crowded sidewalks.

WIth shopping complete, we headed back to the Trafalgar Square area and Gordon's wine bar. We got a table inside this time and had a quick glass of bubbly before heading back to the Piccadilly Circus area for dinner. We went to the Bear and Staff which is where we ate the Friday night after we arrived. It was so good, we wanted to return. Plus, the menu says it's where Charlie Chaplin went to quench his thirst...how good is that? I finally had my first "hot pot"...well it was a chicken and mushroom pie, but on Coronation street they always call them "Betty's hot pot". It may not have been as good as Betty's, but it was excellent! 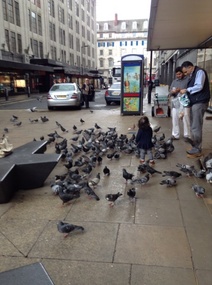 Can you say too friggin' many pigeons??
. Now, the highlight of the night was when we were taking our cheap seats back in Row X and we were approached by staff at the theatre and given upgraded seats. We got moved from way back in Row X to Row N at almost center stage. I've NEVER had that happen to me before. I'm crossing everything that that little stroke of luck continues into tomorrow and possible business class upgrades on the flight home appear.

Even though I was so happy about getting the expensive seats for cheap, I must say, after the intermission I was starting to wonder if this show was appropriately classified as a musical. There was hardly any music in it... and what there was turned out to be only snippets of the famous songs we all know and love. The second half, however, picked up immensely and by the end of it we were all standing and clapping to their rendition of Mustang Sally, River Deep Mountain High and Try a Little Tenderness. Had the entire production been as energetic as the second half, it could have given Book of Mormon (BOM) a run for its money. As it stands, though, that BOM is truly Da Bomb...and stands head and shoulders above the others as the best show I've seen in a long while.

After a quick top up of our Oyster Cards to cover our subway ride from hotel to Heathrow tomorrow, we are back in the room and getting started on our packing. We both just gave up and figure we'll have time in the morning after breakfast and before check out. Our flights are late afternoon, so we have tons of time to get to the airport.

It won't be long until we arrive back on that planet called Reality! I'm definitely NOT looking forward to it. We've had a fabulous holiday, and one that will be a tough act to follow.