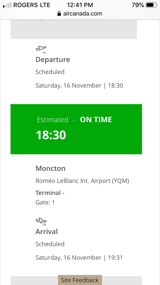 Checked from the bus...so far so good!!
So today we traveled to Moncton airport from Quispamsis by bus.  And like the liquorice allsorts, I did not LOVE all the passengers on the bus.  This is a small bus.  Only 21 seats, so a lot like taking the ‘short bus’ to school.  George...he was okay.  He was a blue button.  He’s a regular on the bus and sits in the very front seat.  Cookie, the driver, and yes, that’s his name...his name tag said so...spoke to George by name.  Obviously a regular!
Many of the other passengers...square candies...I did not like them.  Why, you ask?  Well, for one thing, square candies are TWO pieces of candy surrounding a small, thin piece of liquorice.  The people on the bus...they all saw themselves as the TWO pieces of candy, and NOT the ONE thin piece of liquorice. Just about everyone on the bus had their seat...and then a bag or purse on the seat beside them.  When Kier and I boarded not one person made any attempt to move their bags to allow us to sit.  In fact, some of them looked us square in the eye with a look that said “I dare you to ask me to move my bag”.  What makes people think that when they buy ONE seat on a bus, they are entitled to occupy TWO seats on said bus?  We eventually found seats, but not together.
So why did I label George as a blue button when all the other passengers were clearly square candies?  Especially considering that George was not a lot different from the rest of the passengers.  He sat in the aisle seat...and had his carrier bag firmly planted on the window seat.  But...George got off the bus in Hampton freeing up 2 seats for Kier and I to take quick possession of.
There is definitely a ‘sort’ who travel by bus...in fact, there are ‘allsorts’!
Other Entries
-

Love those pink and blue coated jelly buttons - my fav! Hope the rest of your journey allows you to discover more of those type of people!