-
It's hard to believe, but it won't be long till departure. We have plans for all our ports of call; some are private tours, some are cruise ship excursions, some are DIY, and a few will just be quick trips ashore to replenish supplies (read liquor). 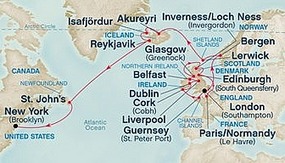 The Itinerary
. I've only got one outfit, so far, for formal nights, so I'd best come up with one other. Our champagne balcony breakfast has been ordered and we also have a free meal at a speciality restaurant which was part of a promotional package when we booked. We have chosen the Crown Grill, but can't actually book our night until on board.

I received good news a couple of days ago when I was offered 2 seats on the Blarney, Cork and Kinsale tour for the Cobh port of call. We were originally "waitlisted", but now have seats. The down side is that had we booked early enough, we would have gotten seats for 20 euros, but because it became so popular, we had to pay full price at 35 euros. Still a good deal considering the ship's excursion costs $219 US. Now I just have to decide if Blarney Castle is worth an extra 12 euros. I'll have to consult with my friend Stuart to see if he recommends it, or just skip it and occupy ourselves in the area. I was always told by Stuart's mother that I shouldn't kiss the Blarney Stone because the locals pee on it!! I never forgot that!!

So we have everything arranged from bus tours to funicular rides; walking tours to hikes; horseback riding to touring the cobbles of Coronation Street.