Enroute to Guernsey...hey, don't have a cow, man!

-
FINALLY! It's been an absolutely atrocious 24 hours with every conceivable hurdle to overcome before we arrived her a little over 7 hours ago. It all started with a flight attendant calling in sick. That is what first pushed the apple cart off the rails...oops, I think that's a mixed metaphor! Anyway, the hour delay out of Saint John was followed by a late departure out of Toronto. Totally unrelated. Then arrival in London, where we were placed in a holding pattern for 20 minutes before air traffic control allowed us to land, followed by a problem with the bridge that couldn't be connected to the aircraft. You'd almost think the travel gods were out to get us. But, we cleared passport control and customs without incident, and luckily I was able to find a duty free shop between customs and the public arrivals area where I purchased a bottle of my new fave drink, Pimm's Blackberry and Elderflower. I wasn't concerned about not getting it on the ship, cause you can't buy it at home, so if they seized it on the gangway, I would get it returned to me in New York and it would come home with me. As you can see, it was a real "start the car" moment when my carryon bag went through the scanner without garnering any undue attention. The best way to drink this flavour of Pimm's is with lemonade. And by mere coincidence, what is one of the drinks that they provide free of charge on the cruise ship? You guessed it...lemonade! So, the question of the day is "just how long can a 40 of Pimm's last a person on a 26 day cruise?" Time will tell!

So here we are on the Ruby Princess 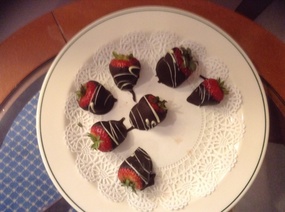 Nice little snack waiting for us in the cabin
. It's our second time in the past year on the ship. Did I mention that this ship was christened by the Bachelorette and her husband, Trista & Ryan Sutter. For you reality tv/trivia buffs, and particularly you Bachelor/Bachelorette fans, you'll agree with me that they have to be the ONLY couple that met through that show that actually made it past the print drying on the cover of the tabloids. I, however, am not a big fan of the franchise, so can't say that had anything to do with our decision to sail on the Ruby yet again.

We are traveling close to shore on our way to Guernsey where we will arrive bright and early tomorrow a.m. We're going to have a very busy first 5 days of the cruise with a different port each and every day. No rest for the weary! As there are no real good shows on in the Princess Theatre tonight, and Movies Under the Stars seem to be focused on featuring concerts, I'm just going to quietly sit on my balcony and toast the fortuitousness of a safe arrival by plane and departure by boat. As I sit here barely able to feel the gentle rolling of the waves, I am compelled to look to the travel gods yet again and hope that the seas will continue to be as calm and restful as they are tonight.

Let the fun begin!
Other Entries
-

All that concern about the volcano and apparently it's the only thing that didn't delay your departure!

Hope you get full to the rim with your Pimm!

Fact of the day regarding Guernsey (known as the Bailwick Guernsey)

Although its defence is the responsibility of the United Kingdom,[3] the Bailiwick is not part of the United Kingdom but rather a possession of the British Crown. It lies within the Common Travel Area of the British Isles and is not a member of the European Union, but has a special relationship with it, being treated as part of the European Community for the purposes of free trade in goods.

You're so smart Patti!!! And yes, Shelley, lesson of the day...it's always what you don't anticipate...