Guernsey, we came, we saw, we had milk!

-
Our early to bed philosophy (for last night, anyway) paid off in dividends today, as we were up with the guernseys, so to speak, at 6:30. After our breakfast of champions, we were off on a tender for shore. It's a short day here in Guernsey with All Aboard at 1:30 pm. 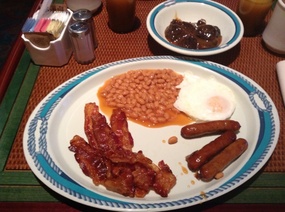 Breakfast of Champions...with prunes on the side!
. Apparently there are a lot of wealthy people around here! We didn't run into or get run over by any of them while here, so no frivolous lawsuits filed by us. The used to make their money from growing tomatoes...but they weren't long deciding that there's way more money in banking then growing tomatoes!

They have a very good bus system, so we took a bus tour around the entire Island for the grand fee of £1 each. And surprisingly enough, I only saw 2 cows the entire time...but unfortunately, I was too slow getting my camera out, so I've got no cow photos...not a one.

One of the more interesting things that I learned about Guernsey was the connection with a book I read a few years back entitled "The Guernsey Literary and Potato Peel Pie Society". The story was set here and took place during the war when Guernsey was occupied by the Nazi's. Apparently that book helped to put them on the map. Being a fan of the book, I picked up one of the many related souvenirs

So, we're back on the ship for the afternoon and evening. I'm enjoying a little Pimm's on my balcony watching all the "goin's on" and getting ready to partake of the afternoon and evening festivities. What will it be today?? First bingo game is this afternoon, but it's early yet. The jackpot builds with every day it's not won. Best to leave that for a few days before jumping into the frey. Slot tourney around 5...that's a must! A production show tonight, a comedian and Movies Under the Stars. The production shows tend to be a disappointment to me, so guess we'll go for the comedian...but, don't want to make any hasty decisions. Perhaps another Pimm's will help with the decision process... And when I'm Pimm'd out, I'll move on to a Kopparberg Cider. Look familiar Fay!! I tested the water at today's port of call. Security didn't seize it from me, so tomorrow, I'll bring another. Life is good with Pimm's AND Kopparberg!
Other Entries
-

Have to say...those prunes look like they've already done the job they're intended to do. Sorry...
Cute bookmarks though!

Is it Plymouth tomorrow

So happy to read your blogs so far! I am envious!!Are there tons and tons of seniors on board slowing you down? Have fun and keep writing!