-
Just saying', I may have to change my middle name to Jinx. Within hours after a telephone call with friend Shelley on Tuesday telling her we had little wiggle room for flights to London did we arrive at the airport to learn our flight was delayed. Yes, you all know that story, for sure. Well, I believe it was yesterday's edition when I mentioned how I hoped the entire cruise, particularly the Transatlantic portion was as smooth as Wednesday night on the ship. Last night...the other extreme from calm. I'm sure it was one of the roughest nights I've spent on a cruise ship, EVER! Right about now you might be expecting a gratuitous comment about Cobh, the Titantic, and icebergs...but you're NOT gonna get it from me. No sirree!

jpg
...who knew!) which is close to Cork. We had a tour lined up with a local company, and went to Blarney, Cork and Kinsale, with brief stops in Charles Fort and Cobh. This is a prime example of how planning your own excursions can save you hundreds of $$ over the cruise tours. What we saw in one tour was split into 2 separate tours with the ship, and would have cost $210 US compared to the $67 C that we paid.

Blarney Castle and the Blarney Stone were something to see. Just getting up the 100 circular stone steps was an accomplishment. Then to actually kiss the Blarney Stone...well, I have a video for your viewing pleasure! The Blarney Woollen Mill is touted to be the largest Irish store in all the world. It's 3 large levels dedicated to everything Irish. I only saw the first level and was none too pleased to get up to the cash to pay for my purchases only to discover that I had forgotten my credit card in the safe. No worries, I would just take cash out at the next ATM. Duh 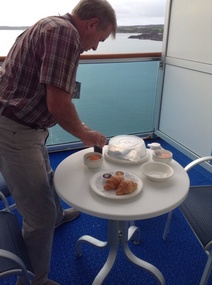 breakfast on the balcony
...my client card is in the same wallet as my credit card. Oh well, that forced me to keep my shopping to a minimum!

Kinsale was a nice little seaside town where we stopped and had some lunch and a little 1/2 pint of Bulmer's for me, Guinness for Kier. Food was okay, but I guess I function at a different speed from the Kinsalians...it was slllllllooooooowwwwww!

We made it back to the ship safe and sound, nodded respectfully at the mural at the Port noting that Cobh was the last port of call of the Titantic. Yeah...I might have had a quick word with those travel gods to try to get back in their good graces again. No more jinx and no more trouble from this point on....them...not me!!

Did your lips actually make it to the stone before the "dizzy" set in?

Hope you've had appropriate antibiotics after putting your lips on that!

Fun facts about Cork: originally a settlement for a monastery, it was overtaken by Vikings...notice any Ikea stores ;)
Also home to Pfizer Pharmaceuticals....makers of Viagra!

Hey Katrina, I got my library card activated today after all your cajoling! Now if I can only figure out how to download the app!

My lips DID make contact,. Didn't get dizzy till they pulled me up after near standing on my head. And the good ole hand sanitizer doesn't really taste too good when smeared all over you lips and mouth!

I agree with Patti on the lips on that stone, as a fireman once said ," Don't put your lips on that, cause you don't know where other lips have been.
I remember when you were officially a member and left for Montreal, a sad day for us but a happy day for you. Have a happy time on your tour but it isn't my cup of tea as you know. love mommy.