-
Well my little chat with the travel gods yesterday paid off in spades today. The water last night was smooth as silk although we were about a half hour late dropping the gangway in Liverpool. And much to some of my friends chagrin, we were not spending the day here in "Beatle Heaven", but opted to travel further afield to fulfill a 28 year obsession...with Coronation Street. Not certain how difficult our trip to Manchester was going to turn out to be, we were in the first group off and got directions for the 15 minute walk to the Lime Street train station. We got return tickets for 12£ each and headed out. The other end of our ride turned out to be almost as easy. We learned, upon arrival in Manchester, that they have free, yes free, bus service within the city centre. We hopped on and found our way to the Salford area and the old home of Granada Studios and of Coronation Street. We received our "back stage passes" and proceeded on an hour long tour of the studio itself. Then we were unleashed out on the cobbles to explore and enjoy. Does it get any better than that?? I pulled a pint in the Rovers Return, I stood in the doorway of The Kabin. I knocked on the door of #9 (the old home of Jack and Vera Duckworth). I saw the kebab shop, Elliott's Butcher Shop, and of course, Roy's Rolls. A dream of a lifetime. It would only have been better had some of the stars of the show been present. Sadly, there were none there. Our trip back to ship was basically a reversal of our trip there. All in all, the day was easy peasy lemon squeezy! 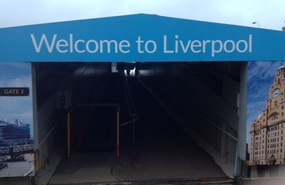 jpg
. You see, we missed our dinner in the dining room, so had to "rough it" up in the buffet. What I learned was that the buffet provides way more "blog fodder" then the dining room does. I know some of you have been thinking that I've been way too tame thus far...well, that may just be about to change.

I opted for some pizza from the pool side pizzeria, and being that we had such a busy day with no lunch or afternoon snack, I told the pizza chef "one slice of each", thinking there were two types of pizza on offer tonight. To my surprise, there were three! Who am I to turn away an extra slice of freshly made pizza? I went into the buffet area to meet Kier and find a table. I consumed 2.5 of my three slices...the third slice had way too many chunks of garlic on it for my liking so I left it. It was then time for desert, so up I went to the buffet. I found some nice fresh fruit chunks and loaded my plate up. Pineapple, watermelon and cantaloupe, and a wee small cup of red jello. I was quite proud of myself and my healthy choices 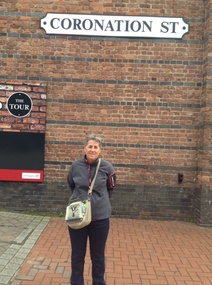 1-jpg
. And then I see her. She's about my age. She's standing between me and the hot chocolate syrup that I absolutely needed to spice up my fruit. She can best be described as a skeleton with skin. She's scooping up a big helping of...pureed pumpkin! Do adults actually EAT that shit?? I mean really! She's finally got enough of that orange gunk and is gone, leaving a clear path between me and that lovely, brown liquid gold. Back I go to my seat with about an inch of that sauce pooling on the bottom of my bowl. Now who do you suppose is sitting at the table beside me when I get to my seat? You guessed it...little Mrs. Pureed Pumpkin. By now she's added a few other things to her plate for her dining pleasure. She's got a clump of greens that some would describe as a salad, (although it lacks anything red or orange), some zucchini, and a very small sliver of something that MAY be quiche. Her friend sits down across from her and they proceed to discuss how they love zucchini and eggplant. Mrs. Pureed Pumpkin is so thin that I can count the tendons on the back of her hands. Her ankles are so small that I think I can see the blood pulsing through the veins under the skin. I so wanted to lean over and tap her on the shoulder and ask "You know you're on a cruise, right? This isn't a floating health spa, ya know". But I just focused my attention to my own healthy fruit dish. And I discovered one more thing before I left the buffet area. I learned that, like fruit, jello also tastes better when dipped in chocolate!

Still can't fathom going to Liverpool without paying homage to the Lads but happy that you got to fulfill a lifelong dream. You fit right in behind that bar.

If you could only do one tour, I'm glad you got to have a great day on Cornation Street...don't watch it, but I know you are a long time fan.

Liverpool history is that of a slave trading post in their port!
Natives of Liverpool are referred to as 'scousers'. I don't know if I heard that term in any Beatles songs!

Sooooo jealous. sigh The Rovers Return...I will see you one day...I hope! And off to Belfast. Shout a big halloooooo to my family! On second thought...you'd be wasting your breath..they are all in their late 70's and 80's so they wouldn't hear you anyway. Still, tell Belfast I miss it. p.s. This blog thingy is so cool!