-
Today we docked in Greenock, Scotland which is known as the Gateway to Glasgow. This was definitely one of the better ports for hospitality. Upon disembarking the ship, we were met by two men in full Scottish regalia. Usually the ship's crew dress up for photos at the bottom of the gangway, but today they were authentic representatives. Once inside the terminal building, we were met by volunteers offering trays of whiskey shots. Kier was particularly impressed that the Scottish like to start their day at 9:30 am with a shot. So far, the only port that was better was yesterday in Belfast. There they put on a free shuttle bus for passengers from the port into the centre of the city. That is not something that is offered very often. Had we not been spending the day with the McLaughlin's we would have gladly used it. Definitely a nice touch. Today's liquor was a close second. 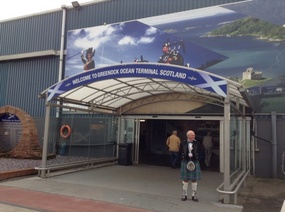 jpg
. Another easy transit day. The trains in the UK are so very convenient and for £6.90 for a return ticket, what could be cheaper? We didn't have any plans for Glasgow, and there didn't seem to be any attractions that were of particular interest, so we opted to enjoy some of the great shopping that is available. We found lots of good buys and got lots of exercise in the process.

Upon arrival back on the ship there was a Scottish Music show in the theatre. A little bagpipe music is a good thing. Too much, however, not so much! We followed the show by dinner and a movie up on deck. Luckily the weather cooperated tonight and, although cold, at least we were dry. Tonight was Kevin Costner in Draft Day. Pretty good, for a sports flick.

Tomorrow is our last stop in Ireland when we spend the day in Dublin. We've both been there a couple of times, so it will be another day of wandering around and perhaps a Guinness in a wee pub by the Liffey.
Other Entries
-

If anyone offers you a Glasgow kiss, run....it's a headbutt!
Have fun in Dublin, home to my all time favourite band, U2!