Nessie oh Nessie, where are you?

-
Welcome to the Western Highlands. And you know what this area is home to?? My all time favourite dog breed...the West Highland White Terrier. Imagine how happy I was to find a cute little guy right on mainstreet. He was a little bit camera shy as it took several attempts to get him to look at the camera...but patience paid off! 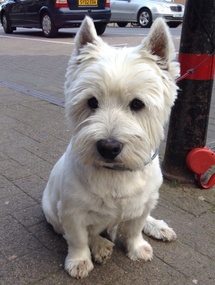 My little camera shy buddy!
...well, interesting, I guess is how you'd describe it. We were booked on a tour from Invergordon to Inverness and then returning Loch Ness and Beauley. It was a steal at £17.50/person. Well, you know that old saying...if it sounds to good to be true, it is. No worries, it wasn't a scam, and it wasn't THAT bad, but...it's all about the details. First off, it was late last night when I realized I'd never heard anything more from the tour company after I received a receipt of my payment. I had no idea where or when to meet the bus. I sent off a quick email last night. No worries, they responded right away with the details I needed. Why they couldn't have done that months ago is beyond me...but hey, better late then never. We showed up a little early for our 10:50 tour because, quite honestly, we didn't realize just how small Invergordon truly was. We got there about 45 minutes early to exchange my receipt for our tickets. Come back at 10:40, we were told, so off we went to explore what Invergordon had to offer. Fifteen minutes later, we were back, only to learn that the bus had been delayed and wouldn't be arriving until 11:15. No worries, if Inverness isn't any bigger then Invergordon, we won't need the 2.5 hours there. And the upside to the delay was I had time to return to the ship and drop of a couple of small purchases I'd made already, plus my raincoat which I decided I wouldn't be needing because the sun was now out and it was beautiful and warm 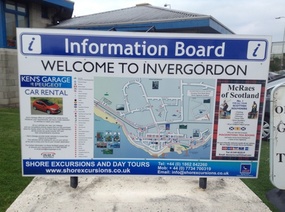 jpg
. When we get back to the meeting spot, the bus pulls in and we load to capacity...and I mean capacity...there isn't a seat to be found. As we pull out of the parking lot to make our way to Inverness...the bus hits a small car turning in. The bus pulls over and the driver gets out. No injuries for sure, cause it was such a light tap that we in the bus didn't even know someone got hit. Apparently he just knocked the headlight out of the car. Within minutes the driver is back on the bus and we're off. Hmmm, I guess the tour company owner was going to take care of it with a cash payment or something...cause the driver wasn't required to hang about and give his details to the police or anything. Hey, not my circus, not my monkeys.

We arrived in Inverness and spent some time walking about, shopping and checking out a few of the sites. The bus was supposed to pick us up again at 2:20...2:40 comes and goes, and no bus. I'm starting to mull over viable options for a Plan B if the bus doesn't show, but 5 minutes later he arrives 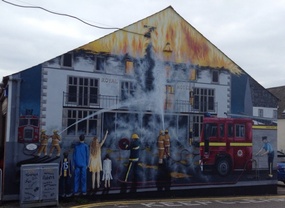 One of the many murals in Invergordon
. We have a quick stop in Loch Ness for photos, Beauley for a bathroom break, and then back to Invergordon. All in all, it wasn't a bad tour...just punctuality wasn't their strong suit.

Invergordon is a nice little town of 4000 compared to Inverness' almost 60,000. The town of Invergordon is chalked full of murals, which Patti mentioned yesterday. I made note to check them out and they were EVERYWHERE. You couldn't walk a block without seeing some type of mural. And all quite good. Inverness hosts a major bagpiping competition in September called the Northern Meeting, but we didn't get to take any of it in.

Loch Ness was extremely anti climactic, although I never realized that it was as huge as it is. The lake is 23 miles long, 1 mile wide, and 750 feet deep. No wonder I didn't see Nessie today. That's a huge lake! Nessie could have been hiding anywhere! Or was she.....

Watch out for the ghosts if you go to Mary King's Close! Hope you have lots of time there, such a histiorical city.....and of course then you have the Bay City Rollers to boot!