Coincidence? I hope so!

-
Let me tell you this...that Edinburgh is one freakin' old city! Not having ever watched Braveheart, I'm not up on all that Scottish history. So, we took a 2.5 hour free walking tour. I'm sure we walked much farther than that today, though.

We anchored off the coast Queensferry, Scotland and tendered into town 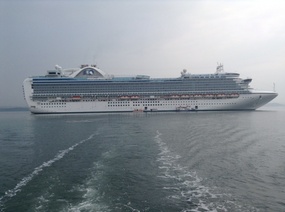 There she is...the Ruby Princess from our tender
. Then we walked up to the train station via a very steep 120+ stairway. Any sense I had of being in shape were dashed after that climb. After a short 20 minute train ride, we were at Waverley Station in Edinburgh. We were about a 5 minute walk from our tour meeting point...soooo... a half hour later, we're still scrambling around to find the right Starbucks. We did find it, and on time, but not before putting a few extra miles on.

I don't know what it is about me and Sandeman's walking tours. The last time I took one was in Brussels, and it rained so hard we had to bail at the midpoint. It rained again this afternoon, but I had my trusty dollar store rain poncho to keep me dry. Coincidence? I hope so.

We heard lots of history and interesting stories from our American guide. Yup, you read that correctly...but sometimes when you take a tour by a non-local they actually know more about the place because they've had to study harder

Queensferry from the tender
. She was a good guide and had lots of stories. The ones that I was most interested in were those related to J.K. Rowling who now lives in Edinburgh. She was reported to have written her Harry Potter series while sitting in a cafe called the Elephant House. Our guide says that is not accurate, even though she did spend time at that cafe, she actually wrote the series at her brother-in-law's cafe, and the sign posted outside the Elephant House was just an agreement made between them and Rowling. We spent some time in the graveyard at Greyfriars Kirk. We saw the statue for Greyfriars Bobby, learned what a mortsafe was and saw the very popular gravesite for Tom Riddle, aka Voldemort. Okay, it's not REALLY that Tom Riddle, but you'd think it was by the worn out grass in front of the monument from all the Harry Potter fans.

Oh, and did I mention there was ANOTHER bus accident? Yesterday we were ON the bus. Today we were standing BESIDE the bus. Coincidence? I hope so!

After the tour and the requisite souvenir shopping, we headed back to the ship. Another sea day tomorrow. Maybe it'll actually be warm enough to enjoy some of the pools and hot tubs on the top decks.
Other Entries
-