Have you ever been to sea, Billy? Part 2

-
Another sea day today, so spent the day enjoying what the ship has to offer. That would be food, drink, gambling, shopping and entertainment. Let's start with Bingo. I spent a couple of hours and nearly $100 trying to win at Bingo today. Suffice it to say, if we were playing horseshoes or hand grenades, I'd have been a big winner...cause as the old saying goes "close counts" when you're playing either of those. Me, I sit here with the knowledge that I was one number away for the Jackpot prize today of $1600. Just....one....number...may as well have been 10. And in case you're curious, O-71.

Now on the topic of Bingo 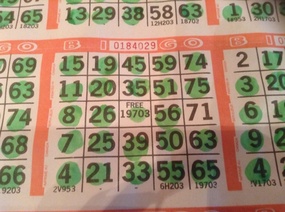 jpg
...there's a game we all learned when we were young. Heck, it started when I was very young and learned that old song "B-I-N-G-O, and Bingo was his name-o". How many times did we sing that? Too many to count. And the entire concept of Bingo is quite simple, is it not? Let's break it down:

1) The caller calls a letter and number combination, eg B-1
2) You check your card for that number, eg look under the B for 1
3) If you have the called letter/number combination, you mark your card in some fashion, if you don't have it you await the next one
4) These steps are repeated....over and over and over again until someone has a line or whatever is required to win the game.

Really quite simple...you'd think. So why is it that the caller had to explain it over, and over, and over again. I realize that not all people may have PLAYED Bingo in their lifetime...but to not even be familiar with the concept??? Baffles the mind. 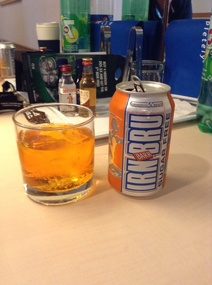 1-jpg
. I picked up a couple of cans in Edinburgh because our tour guide told us how very popular it is in Scotland. She described it as tasting like liquid cotton candy. Hey, right up my alley! I didn't notice till back on the ship that I inadvertently bought the sugar free version. I think that's a good thing, cause even the sugar free version is verrrrry sweet! Needless to say, I don't think I'll be stockpiling it to bring home. It is pretty good, though, when mixed with some vodka. Takes the edge of it!!!

I competed in a slot tournament in the casino today. I wasthisclose to making the top 10 final for the $500 prize. Again...horseshoes or hand grenades.

Dinner tonight was the menu I'd been waiting for. The salute to America. Lobster tail and king prawns were on the menu as well as Baked Alaska. I'm not a big Bakes Alaska fan, so opted for the sugar free chocolate tapioca pudding. It was so good...and sugar free...that I had 2. Mmmmm mmmm good!

In the shopping area they had a big sale on their "Jackie Kennedy inspired" jewellery. I'm not a huge jewellery fan, but I found a bracelet that I really liked and the price was right. It's almost my birthday, right, so I decided to treat myself. After shopping we took in one of the production shows by the ship's singers and dancers. It was quite good.

We've got an early start tomorrow as we are picking up a rental car at the port of LeHavre and heading up to Normandy and Juno Beaches. I'll be packing lots of kleenex, cause I expect it to be an emotional day.

'O' so close looking at the Bingo card....did one if those old geriatric giants best you ;)