-
You get down off a duck! Nah, really, you do have to get down off a horse at some point, but the good thing is, it's easier getting down, then it is getting up!

After a verrry rough night we arrived early this morning in Akureyri, Iceland 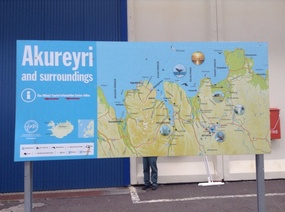 jpg
. It wasn't so much that the sea was rough, but the wind had picked up through the night, so was quite noisy. It was cool when we pulled into port, so we had to dig out our warmest clothes and layer, layer, layer. We were heading out to do a horseback riding tour, so we had to have warm clothes that weren't too tight from 17 days of over indulging!

We traveled outside of town to a Guest House that offered riding tours. We were the only 2 from the ship, but there were some other tourists who were there when we arrived. We all got saddled up, which wasn't as easy as it sounds. I had figured STAYING on the horse would be the difficult part. Who knew that GETTING ON the horse was going to be even harder. After a couple of attempts the young guides just went and got me a chair. Embarrassing?? Maybe, but it was easier than the alternative!

We had a nice ride through fields, along beaches and beside roads. It was a bit reminiscent of a horse ride I took many years ago at Rockwood Park 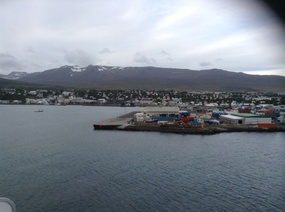 Akureyri
. Liz, you'd remember that day, I'm sure! Anyway, it was a nice ride, and a good day. You know you're out of shape, though, when EVERYTHING starts to hurt within hours after getting back to town. I swear the whole adventure was better than a visit to the chiropractor! At one point I heard every disc in my back crack. A pretty good adjustment, all in all!

When we got back to town, we walked up past the local church and to the Botanical Gardens. Unfortunately, it was about a month beyond the peak for the Gardens, but some of the flowers were still in bloom and very colourful. A few souvenirs...I mean, a few EXPENSIVE souvenirs later, we headed back to the ship to get cleaned up and get the horse smell off us.

Tonight it was out on decks looking for the Northern Lights. The woman who owned the Guest House from this morning told us that last night was a spectacular display of the Lights. We were out at sea and didn't get to see them. It could be late tonight, and as of right now, they are well hidden. We'll keep looking though!
Other Entries
-