-
A busy sea day it has been and one that's been smooth as can be. It's really hard to believe that we are in the middle of the Atlantic. And just for the record, my lucky underwear have officially lost their status...I didn't win ANYTHING I tried my hand at today!

We started our day competing in the Speed Sudoku 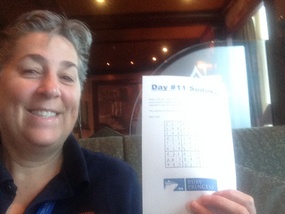 Too little too late
. With only 10 minutes to complete the challenge, neither Kier or I was able to finish. I needed about an extra 30 seconds to finish and have a chance at the valuable prizes on the line...a free Princess...pen :(

From there we moved up to the 19th deck to play in the Mini Putt Competition. Again, we missed out on the prizes. I did tie for fourth...but that just didn't cut it to win a valuable prize...a free Princess...bag clip :(

Off to Round 2 of the Mini Olympics and a session of Beer Pong, without the beer. Kier and I represented Canada strongly, each scoring 12 points which put us in a 3 way tie for 3rd. Still a few more events to go, but our team currently has a slight lead.

After all this athleticism, a little pampering was in order, so I was off to the Lotus Spa for a special "20-20-20" deal. This consists of a 20 minute treatment of a mini facial, foot and ankle massage, and a scalp massage. I was nice an relaxed before heading off to formal night and lobster tail with crab cakes.

What will we do in six more days when we're back to reality and fending for ourselves at mealtime? Lose a few pounds, I should guess.
Other Entries
-