-
As I write this, we are just passing by the location where the Titanic sank. It's pitch black outside so nothing can be seen of the site. The whole ship, just now, shuddered like it struck something in the water. Just ghosts I bet.

We had a great stop in St 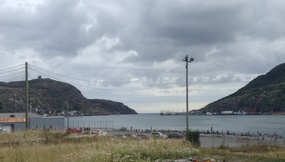 such a narrow channel for such a big ship
. John's today where the sun shone most of our stay. We had a nice walk around the downtown, opting out of the touristy sites as we'd been before. It was just nice to walk around, stop in at Timmy's at enjoy a nice leisurely day in our last port of call. Three more sleeps and we'll be disembarking in New York. But in the meantime we've got 2 more sea days and the finale of our Mini Olympics.

I have to say, it did my heart good when we left port out of the narrow channel to the Atlantic Ocean that the Newfoundlanders gave us such a warm farewell. There was a parade of cars tooting horns and people waving all the way out. It was, by far, the best we've had of all the ports. No surprise knowing the Newfs!

Oh, and I met a new member of the Cast of Characters this morning in the buffet line. We'll just call him "Mr. Prune Picker" cause when I was in the buffet area getting my few little breakfast items, he was standing in front of the stewed prunes and picking them out 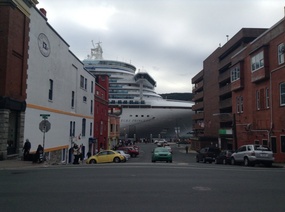 that is one big ship!
...one by one. Now come on...they are stewed prunes...they're pretty much ALL ALIKE! After a few minutes, he had selected his 5 prunes and moved on. I scooped up a few and returned to my seat. There I found a woman sitting with Kier. Her husband was in the buffet line...you know where I'm going with this, now don't you?? Yup, Mr. Prune Picker shows up at our table. He places his bowl of cereal topped with the carefully selected prunes, and then disappeared again. He returned shortly after with another empty bowl. This one he placed upside down, on top of his cereal bowl. His wife, who seemed a bit embarrassed by all this asked "What are you doing that for" to which he replied that "people are coughing all over this place and I don't want to catch anything". I wasthisclose to replying "After so carefully selecting his prunes he must protect them!"...but I didn't. He then disappeared again. We had almost finished our breakfast when he returned with a little box of medication with him. It seems he had meds that he had to take with food, and my guess is that he is so anal about things, clearly displayed by his fastidious prune picking, that he couldn't do what I would do if I had meds to take with food...I'd just eat my breakfast and return to my cabin and take my pills. I mean really, the meds end up down there with the food anyway. Does it really need to be taken with the food simultaneously?? To each his own!

Goodnight all!
Other Entries
-