And so it goes

-
Here we are, almost at the end of this fabulous vacation. One more sea day before docking in New York City. We received our certificates for making an "Arctic Circle Crossing". Yeah, yeah, that and a buck fifty will get you a cup of coffee.

It was a day of victories, though 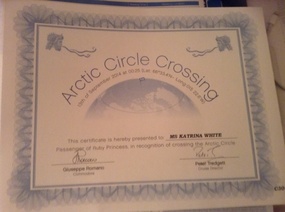 jpg
. I won my first ever Bingo game on a cruise ship. Of all the cruises I've been on, and all the Bingo games I've played, I finally won one. It was the first game of the session, so the lowest prize of $100, but I'll take it! Tomorrow is the big finale. A session in the morning and another in the afternoon. The jackpot of $2500 must go tomorrow at some point! I'll be there.

I had some luck at Roulette as well and tripled my money. Now, we're only talking about going from $25 to $75...but perhaps we'll increase that tomorrow as well.

And lastly, I tied for first place in today's final Mini Olympics when we competed in the bean bag toss. Tomorrow is the awards ceremonies.

I also took some time to get a head start on my packing. That's the part I hate the most. Not so much the end of the cruise, but the preparation for our trip home.

A busy day tomorrow, so off to bed we go.
Other Entries
-

hi Katrina Life has been so busy and I was away for almost 2 weeks so had not had a chance to read your blog. I just spent the last hour being wonderfully entertained. I am still giggling over the lady with the pureed pumpkin. thanks so much for blogging and all your lovely pictures. It was so fun to read and see,. Good Luck with your arrival in NEW YORK tomorrow. Hi to Keir

Hope you were away for pleasure, and not work!