-
We've had a great start to our first day here in London. We had smooth flights and actually met up in the Customs Hall at Heathrow Airport. Our suitcases were awaiting us on our respective luggage belts and we were off to catch our train into Paddington. We decided to treat ourselves with a trip on the Heathrow Connect. It's a more direct route to Paddington than the subway and requires no train changes. And it's less than £5 more expensive which is a bargain. And due to a switching problem on the track, we were "upgraded|" to the Heathrow Express for no extra charge. The Express is a direct trip from Heathrow to Paddington...no stops at all...and only takes 15 minutes.

Now, I realize that Will and Kate are somewhat busy at the moment, what with planning for baby #2 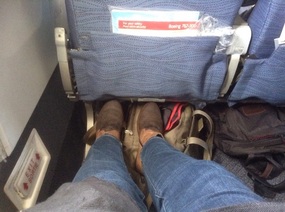 Lots of legroom in row 19
. So imagine how pleased we were to be met by, none other than Princess Anne who was entering Paddington Station as we were leaving. She didn't have time to talk, but I'm sure we'll be invited over later to catch up on all the gossip!

By 1:30 we were dragging our suitcases up the one flight of stairs into our room. It is a good size with a nice bathroom. There's a desk and armoire in the room as well.

Unfortunately, my surprise for the day did NOT pan out. I had requested tickets for the taping of The Graham Norton Show. For those who aren't familiar, he is a popular chat show host here in London who regularly welcomes big name celebrities to his show. Apparently he wasn't moved by the impassioned pleadings of this Canadian! Oh well, we found something else to do with our time. We strolled down Oxford Street and had a pop in visit with a couple of our favourite men...John Lewis and Mr. Selfridge.

We enjoyed a late and light lunch at The Clachan. I had a typical British lunch...a hot pot!! Not as good as Betty's I'm sure, but pretty good! Fay tested out another local delicacy...the chips!

We dragged ourselves back to our hotel early tonight as jet lag is starting to settle in. Tomorrow (and perhaps a bit longer) we get to test the theory about seven years bad luck when a mirror gets broken cause there maaaaayyy have been a little incident with a mirrored door on a medicine chest in the bathroom. Oops!!

I'm guessing "Betty" is a character from Coronation Street?

You are so right!

Im so enjoying this Katrina!