-
It was another interesting day here in Dublin starting with our 3 hour walking tour around parts of the city. We had a great guide named James who took us all around the south side of Dublin. At our mid point break they told us all about the nightly pubcrawl. Live music, they said. Drink deals, they said. So, Fay and I both decided that we'd experience our first ever Pubcrawl. What better place to do it than here in Dublin where the music is so lively and the cider is so tasty?? So we bought tickets for tonight. 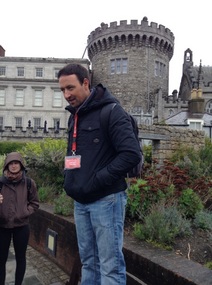 James our guide
. It's called Avoca. The food was excellent. From there we shopped Grafton Street, the St. Stephen Green Shopping Centre and the Powerscourt Mall.

Tonight we were off on our first ever Pubcrawl...and I'm afraid to say...we were Pubcrawl Dropouts. The plan was to start at the Workman's Club at 7:30...then at 8:30 we'd be off to the next spot. And on and on till we'd visited 4 different pubs and then to the final stop which is a night club.

We show up at the first club. We're shuffled upstairs where we can get 2 drinks for €4...as long as they are Guinness, some other beer on tap, or cider on tap. Damn...so no flavoured ciders for us. We take up a perch in a room across from the bar where we watch as more and more young people poor in, all with the identifiable green bracelet of the pubcrawl group. They continue to come...more and more...like someone opened the flood gates. They have an average age of about 24. There's no one our age. Or even close to it. There's no one who wisely used only one of our "2 fer" tickets, holding the second to see if we could, in fact, finish one of these tall glasses of cider before ordering a second. (And we couldn't, so we gave our other coupon away.) When 8:40 came (they aren't punctual either) we obediently followed the pack to the Mercantile, our second stop of the crawl. We entered the bar via the back door and saw people 4 deep at the bar. Here there were €4 and €5 drinks and with your purchase you get a free shot of vodka. Hmmm....I could barely finish the drink in the last bar. It's really too soon for another. And we're only here an hour. And when does the music start? Oh, not for another 1/2 hour. And this is a small little room for such big instruments. I'm fairly certain my eardrums will be broken. Is it painful when an eardrum pops? So, we did what all people of our age would do when faced with a 4 deep bar of 20 somethings who were quickly, but not quietly, outdrinking us...we gave away our shot coupons and snuck out a side door. We headed back to our hotel for a quiet drink of our own...flavoured cider...in our room...and with lots of ice!!!
Other Entries
-

What? You couldn't video for more than ONE SECOND??!!

I THOUGHT I had...just like I thought I got the video of our guide leading us in a rendition of Molly Malone...but only got. 3 second clip about him explaining the superstition that rubbing Molly Malone's left breast brings good luck. BTW...I didn't try it. Oh, and these guys only wave when someone puts money in their jar...then back to stone still!

Just laughing at your pub crawl! You can sure tell your age when the crowds are big and the music is too loud and you can't keep up with the young ones!