-
A long time ago, a troop mate of mine told me that the one thing she hated about being dropped into another culture and living/working in another language is that no one gets your sense of humour. That culture was the french culture of Quebec. I can now totally attest to the frustration that she must have felt as tonight we went to see a play called 'The Field'. Now, these actors were speaking in english, so it's not like there was that huge a language gap...but man oh man...they weren't speaking the english that I could understand. And some of them spoke so fast, and with such strong accents that there were many bits that I just didn't get. The worse parts was when the audience broke out in a loud guffaw, or even just a polite chuckle and we sat there wondering what the heck was funny about that? But we did get the gist of the story, you know, the big picture...so all was not lost. And we got to see a beautiful theatre called the Gaiety.

Earlier in the day we toured the north side of Dublin 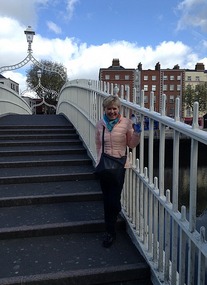 Fay on the Ha'Penny Bridge
. We've been told that it is so different over there that it's like a different country. Well, we didn't quite get that either. Not alot of difference that we could see really. It's supposed to be "grittier" over there...you know...poorer...downtrodden. Maybe it was that way hundreds of years ago, but doesn't seem to be the way today.

We stopped into a few "Carroll's" stores. They are the huge 'everything Irish' gift shops. They are on every block in Dublin, so on the off chance that some carried different merchandise, we made an effort to check out several.

We found another nice restaurant for lunch called Taste Cafe. It was great! We put a few more miles on my feet and they are getting much better. I've definitely become a convert to the "pop'em" philosophy when dealing with blisters. It has certainly made my life somewhat easier.

And from the pages of that old book "if it's not one thing, it's another"...the arm of my glasses fell off tonight. Unlike with my feet...I have another pair...of glasses.

Another late night as Fay and I have been sitting here gabbing and enjoying cheese, crackers, cider and wine for the past 3 hours. Tomorrow is another busy day. We're off to Dalkey in the morning...expecting to meet Bono for lunch at Finnegan's and then tomorrow night to our Irish House Party.

Falling asleep will be swift and welcome!!
Other Entries
-