It's raining Leprechauns and Sheep!

-
It has been pouring here all day today. If I was home I'd say it was raining cats and dogs...but since I've seen neither of those things here in Ireland, I'll go with what I have seen that will accurately describe the big rain we've experienced. Yup...leprechauns and sheep! That works. Have I really seen sheep, you ask? Of course I have!!

Well, as most of you may know by now, my lucky underwear stowed themselves away in my suitcase after I THOUGHT I threw them away in Vegas 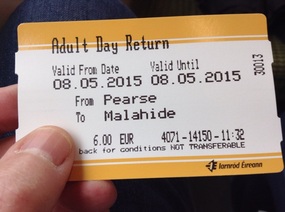 Oops!
. Out they came today in an effort to redeem themselves by bringing me luck in my quest to see Bono in Dalkey. So did I see Bono, you ask? Well, a better question was "did they redeem themselves"? And I think I have to say...yes, they did. But a simple "yes" is really too short an answer. Redemption in this case encompasses far more than my seeing, or not seeing Bono.

It's truly been a day of dichotomies. First of all, our plan for the day was to do a very long walk between Dalkey and Killiney...a 2-2.5 hour walk. It's pissin' down rain, so just getting to the DART station is trying. There is no "human" working at the entrance to Pearse Station, so we have to rely on a machine to purchase our tickets...and when dealing with machinery (namely computers) nothing is ever straight forward. That would explain how we end up with tickets from Pearse to Malahide. No biggie...unless having a ticket that is going in the exact opposite direction from where you're going is a problem. The nice employee that I asked for advice seemed to think it was 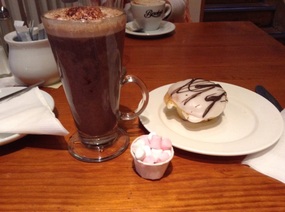 Hot chocolate & marshmallows plus my Fairy Cake!
. He directed us to go to Dalkey with the ticket and just "talk to yer man" at the station in Dalkey who would open the gate for us when we are ready to come home.

Off we go, cause sometimes that old Katrina philosophy of POIIWL (piss on it, I'll worry later) kicks in. We arrive in Dalkey and to no one's surprise, least of all mine...Dalkey is a tiny little station which relies totally on technology. No "yer man" to be found. POIIWL!!!

We head off down the main street in Dalkey and the first thing I see is Finnegan's!! That's Bono's watering hole!! I'm feeling confident!! It is still morning, though, so may as well check out the town and try to find out where we can go to do this nice walk. We stop into a rather interesting castle-looking place, conveniently named Dalkey Castle! In we go, more to get out of the rain than anything else. We meet some very helpful people inside whom I boldly ask "What is there to do in Dalkey when it's pouring rain?" Take the tour of Dalkey Castle, they say 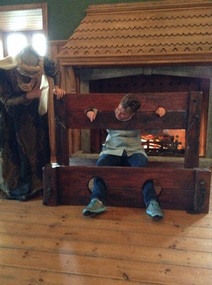 In the stocks
description
. I mention "the walk" and they give me directions and a map and all. Off we go armed with our trusty umbrellas. We have walked about 15 minutes and we're at Coliemore Harbour. Only 2 hours more to go...give or take 15 minutes. We're cold, we're miserable...but Bono is OUT there...I just know it. Okay...reality check...Fay asks me to name a song that Bono sings. You know...I don't even know one. I'm really NOT musically inclined. Is Bono worth me contracting pneumonia? Is he going to visit my bedside and apologize for me getting sick on my pilgrimage to see him? That would be a NO and a NO!!

So...what is there to do in Dalkey in the pouring rain? Hmmm...seems like there is a tour of Dalkey Castle which may well be the only game in town! And at €8.50 it's starting to sound like a steal. We stop enroute at a lovely wee coffee shop where we have hot drinks to warm us up. I also have my first ever "fairy cake"...cause who wouldn't want to?? A cake made by fairies sounds pretty good. But oh, what if it's a cake made OF fairies?? Perhaps less good! Turns out it's neither actually. It's a cute little cupcake only much denser and less moist than ours at home. All in all, it will be my first AND my last fairy cake!

Off we go in time to catch the 1:40 tour of Dalkey Castle. And wouldn't ya know it...turns out to be a private tour. Sometimes the BEST things are those that are spontaneous 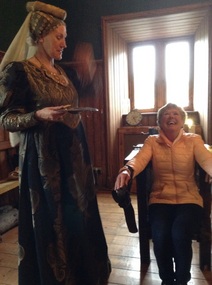 Fay having a medical treatment
. (a certain theatre birthday celebration comes to mind) This tour was a HOOT! There were actors and audience participation. We had a blast. And...when it was over...I got a map and directions to Bono's, Enya's and Van Morrison's houses....and...even MORE exciting...Maeve Binchy's!!! Who knew one of my favourite writers lived in Dalkey...well, until she died in 2012.

After the tour we decided to pop into Finnegan's...you know...just in case Bono's hanging around. Turns out...he's not. But apparently Maeve was a regular at Finnegan's too...and had a regular table. They gladly pointed it out to me and confirmed the location of her house for me as well.

When all that is done it's now "later" of the POIIWL fame. We're off to the DART station and we decide to just put our tickets into the turnstile and hope for the best. Yesssss....the tickets work and we're on our way back to the hotel. We have to get dried off and ready to go out for our Irish House Party.

What's waiting for us when we get back to the room? An email advising that the Irish House Party has overbooked and we've been rebooked at Taylor's Irish Cabaret in Rathfarnham. By all accounts, this is a bit of an upgrade. It's a 4 course meal and Cabaret type show of Irish music, dance and comedy. The value of tickets is over €70...significantly more than we paid. And to top it all off, Fay ordered a €12 bottle of wine which she could take with her if she didn't finish...and they never showed up to collect payment. Nice!

To make a long story short...I know...kind of late for that now...we had a great time and a great show...a great day all around actually...thanks to my lucky underwear...you've definitely redeemed yourselves!!

I guess I'm becoming more Irish than ever...cause they say that you know you're Irish when there's no way to make a long story short...guilty as charged!!
Other Entries
-