You can't get there from here...

-
The best laid plans...well, you know the rest. We opted to go to Wicklow today on the advice of a taxi driver we saw last night. So with tickets in hand we boarded the train heading to Bray. And as a bonus, we got the right tickets this time! I finally have that ticket machine figured out!!Upon arrival in Bray we spoke to an employee about where we go to change trains for Wicklow. He told us "ohhh, we don't have good service to Wicklow. You could get there and not get back tonight." He said he lived in Wicklow, so I immediately asked him "Are you heading home soon?", but he had several hours left of his shift. Otherwise, I'm sure we'd have had a ride. He came up with a few other options for us...but we still had train tickets to Wicklow. He told us to go see "yer man" over the other side of the station. That fellow sure gets around!! He was supposed to be in Dalkey when we were there, but he wasn't. Fortunately, we did find him in Bray. We ran some of our options by him and he was fine with us not actually going to Wicklow, even though that's where our tickets were supposed to take us. He also told us how to circumvent the turnstiles upon our return. 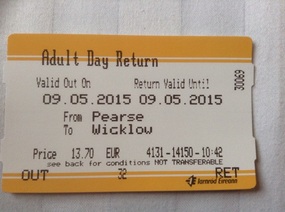 Got it right today!
. From what we've found while using it is that it largely operates on the honour system. The turnstiles are locked open so you don't even have to put a ticket in. And no one checks your ticket once on board.

So, we wandered around Bray for awhile and then decided not to go to Greystones as we had planned when talking to "yer man". Instead, we headed back towards Dublin, but stayed on the train right through to the end of the line at Howth. That's pronounced "Out"...cause they don't bother with h's here in this country...or should I say 'ere in this country!! We figured we were safe cause we'd overpaid by so much on our tickets to Wicklow that it would more than cover our fare to Howth. We had a seafood dinner in Howth before heading back to Dublin and our hotel.

Tonight, being Saturday night, there was no question as to what we would do. Head off to Temple Bar and soak up the night life and a bit of Irish music. We found a live duo playing in the Oliver St. John Gogarty bar. We were there a couple of hours and then when they took a break, we took our leave.

Tomorrow's our last full day in Dubllin before we head home. I can't believe it!!
Other Entries
-