When you can't see for looking

-
Our flight over was pretty good, considering we were almost an hour late leaving Toronto. We made up some time in the air and arrived pretty close to on time. Our transfer from the airport to hotel by bus was pretty easy as well. There was plenty of signage and my research proved spot on. For 5€ you'd really be crazy to pay more for any other mode of transfer. It was 32 minutes from getting on to getting off the bus. And then we learned a valuable lesson. Amsterdammers...or just "Dammers" don't have a clue about their own city. We, or should I say Kier, asked directions 4 times today and each time we were within a couple of blocks of what we were looking for. Each time the local directed us entirely in the wrong direction. The oldest tourist trick in the book, right? But I don't really think they were being intentionally deceptive...I just think they're ridiculously uninformed about their own city. 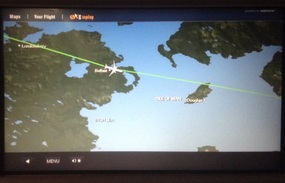 I shouted out to my friends in Belfast enroute!
. The information I had was that the Best Western was behind the Marriott. We got off at the right bus stop and did a 360 looking for the Marriott. Didn't see it so I went with my gut...my tired gut...my been up most of the night gut because those great exit row seats we scored had zero recline...so what can I say...the gut was overtired. We walked a block and Kier asked a young fellow on the side of the road. He didn't know the Marriott, but looked it up on his phone. Showed us what he found and then pointed us in a direction and said it was a 3 minute walk. We walked for 5 minutes...nothing. We stopped again and showed a bike rental employee our hotel confirmation with the address. He directed us back towards the area we came, but on a slightly different road. A 5 minute walk he said. Off we went and guess where we end up...exactly where we got off the bus in the first place. Kier asks a third guy who works at a bar in Leidse Square. Nope, he didn't know what a Marriott was, let alone where it was 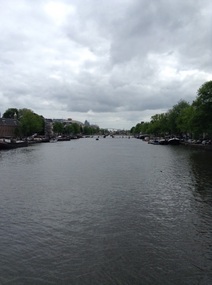 one of many canals in Amsterdam
. And then I woke up...there it was...as big as life just behind where we got off the bus. A seven or eight story hotel with a huge red Marriott on top. No wonder we missed it!!! Off we go. I stopped at the Marriott and asked a desk clerk if they knew where the Best Western was...and just as my initial directions described, the Best Western was on a street behind the Marriott.

We checked in, but unfortunately our room wasn't ready for us yet. It was surprising, really, since we did that hour long walk about before we got there. Off we went for a quick bite and a glass of Heineken. It is the local beer. Heineken is to the Dutch what Guinness is to the Irish. Unfortunately, I don't like either!

Back to the hotel we went for 2 pm and got our room. It's great! A nice size on a quiet street. We're on the 1st floor, not to be confused with the ground floor...cause we're one level up from the ground...and have a nice view out the back of the hotel. It's quiet and peaceful.

Once settled in we had to head out immediately to our free tour of the Gassan Diamond Factory. We got to see some apprentice diamond cutters at work shaping and polishing diamonds. Then we got to look at various cuts and sizes of diamonds and then several finished products. Kier was disappointed that they didn't have any men's rings, but seemed to focus entirely on women's jewellery. I found a ring that I really liked...but for 7300€ you best MORE than just LIKE it!!

A quick grocery store stop for cheese, crackers, wine and cider and then we were back in our room for an early night. But not before I had my first bottle of some local cider! Some travel habits are just hard to break. Cheers, Fay!!
Other Entries
-

Cheers to you too Katrina I am in Vancouver and every place we have went we have asked if they have pear cider and not a single one yet anyway.

And I thought BC was advanced! You know what this means, Fay?? A trip to NB/PEI in the Fall!!

Hi I actually had a cider in Ottawa last week for the first time! It was actually quite good! Cheers!

Another one converted!! Yay!!