-
We left Amsterdam this morning and had a couple of short train rides to get us to Brugge. We changed trains in Antwerp. That has to be one of the most beautiful train stations I've ever been in. The train station in Brugge, on the other hand...just a train station.

Our hotel in Brugge is right beside the train station 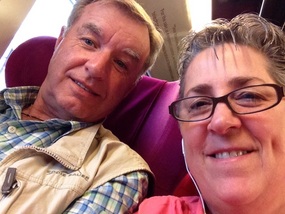 Riding the rails in Rotterdam
. It's a budget hotel...and they weren't joking. It is an Ibis hotel and reminds me ALOT of the one we stayed in at Darlings Harbour, Australia many years ago. This one is a first though...the shower and sink are in the same room as the bed. The toilet is in a separate room...sort of! It does have a door, put it that way. But the bed is a good size and once we got the suitcases under the bed, we have sufficient room to move around. It's almost brand new. It's very clean and well maintained...but oh, those postage stamp towels! And you know it's a budget hotel when they charge you .50 for a map! One that they give you free at any other hotel.!!

We took a walk into the center of town this afternoon and it's a beautiful 15-20 minute walk. And man oh man...there's some old sh*t in this town. By sh*t I mean buildings...and by old I mean friggin' ancient!! It took us five minutes to discern the 4 things that Brugge, and indeed Belgium, is known for. Chocolate, lace, waffles 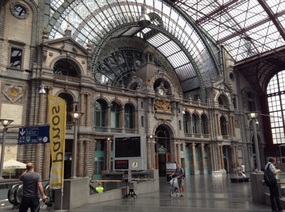 Antwerp Train Station
comment
...and beer...and if you plan it right, you can consume 3 of them together...and then wipe your mouth with a lace napkin!!! But that's for tomorrow!! Today we just got our bearings and had a quick bite, bought some groceries and went on the hunt for ice. I picked up a couple of bottles of fruit flavoured beer. It's pretty good...but it would be soooo much better with some ice. That's not gonna happen though. Budget hotels don't have ice machines, nor the ability to make ice. Markets don't even sell ice here. They suggested we go to a bar which is close by and ask for some. I'm sure that would work well...not!

I have the feeling that this place may be a ghost town in the evenings. Today it was jammed with what looked like cruise ship or river boat excursion groups. They were continuous. Hundreds...no thousands...of people travelling in groups. Some had numbered stickers on their jackets, some had pins, others plastic badges...but most all had insulated bags that carried their Belgian chocolates back to their ships.

Early night tonight. Curling up on this bed with what can only be described as an Ikea mattress. No box spring, just a thick mattress and sponge on top. Hey...what do you expect for 70€/night. Can't wait to see what their continental breakfast includes!!!
Other Entries
-

Belgian chocolate, a real treat!! How long are you staying in these close quarters..cuddle up, buttercup! Weather here finally in high 20's today... Enjoy rest of your trip!

Only 3 nights, Doreen. We could do that standing on our heads...which may be the next thing we try if the bed is to small! Actually the bed seems like a Queen, so should be fine.

70E? Seriously? Guess I was spoiled by 5E albergues!

Great pictures thanks for posting.

Wouldn't get anything that cheap, Shelley, unless I tried the hostel route...not gonna happen...