-
We spent the day walking, both the city centre and further afield. We took a canal boat ride because, based on the line ups we saw yesterday, it is THE thing to do here. We taste tested some of the sweet treats that the chocolate shops sell, beside the usual chocolate. 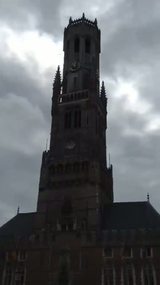 Belfry (Belfort) and Market Halls (Hallen)
description
. We headed west from 't Zand, which is where we attended the weekly market yesterday. When we saw how big and vacant it was today, it was hard to believe that it was such a hustle and bustle yesterday. We wandered around St.-Andries for a bit, but when making the return trip back to city centre we stumbled upon Canadaplein. A beautifully maintained little park with flowers and a sitting area and a plaque commemorating the space to the Canadian military who gave their lives fighting for the liberation of Belgium. It was an unexpected find, and one that certainly isn't advertised in any guidebooks that I searched through.

Well, we've certainly covered Brugge in the past three days. There isn't anything we haven't at least seen, even if there's some things we chose NOT to do...like climb the 366 steps to the top of the Belfort bell tower. Hey, I got my steps in according to my FitBit, with a few thousand to spare!! But we did hang around to listen to the nice music played by the bells every hour. Have a listen.

Tomorrow will be an early start, but thanks to our close proximity to the train station, it won't need to be too early a start. It's about a 3 minute suitcase drag from the hotel into the front doors of the train station. Easy, peasy!! Looking forward to the relaxing train trip to Brussels, and then the high speed train to Paris.
Other Entries
- 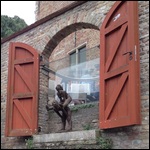 Did you get to the Chocolate and French Fry Museums? Also, did you try the Curry Mayo on your fries - my favourite...so many fry toppings, so little time (and a bit hard on the arteries!).

I guess there were a couple of stones unturned! Didn't get to those museums. And I'm a good ole ketchup girl when it comes to my frites...don't even broaden my horizons to mayo.

Just getting caught up on the last 5 days! I guess that Brugge is a nice place to visit! We are finally getting some nice weather here. When you return , hopefully we can get together before I head to the cottage for the summer! Enjoy your last few days!