A tale of a fateful trip

-
I’ve discovered something today…and it’s something that you may find odd to be discovering on a Caribbean Cruise. What I’ve discovered is this…there are no skeletons in my genealogical closet. More specifically, there are no “latin” skeletons in that closet, of THAT I can be certain. It’s a sea day here on the ship. An official, scheduled sea day, unlike yesterday’s sea day that was caused by the cancellation of our stop in Princess Cays. No real surprise to me. We did a short cruise in February down in this area, and that time our stop at Princess Cays was also cancelled. I’m starting to think it doesn’t REALLY exist. I’m not upset about it though, cause it is a private beach on the island of Eleuthra which is “owned” by the cruise line and serves as nothing more than a cash cow. Apparently there’s not much there except “beach stuff” and they absolutely nickle and dime you for every little thing. As we’re not big fans of beachin’ it, no great loss, I say.

Okay, so as a scheduled “at sea” day, they usually ramp up the shipboard activities 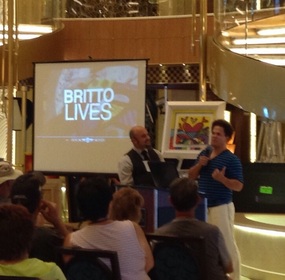 Some famous artist on board...Romero Britto.
. This ship, however, seems to be a bit lacking in that area. For starters, my usual early morning “speed sudoku” hasn’t made the cut and isn’t even on the schedule. I used to win on a regular basis. But really, how much Princess kitch can one person handle. I have all the lanyards, magnetic clips and flashlight keychains that any person should own, all won compliments of speed sudoku on previous cruises. So it was necessary for me to find ANOTHER reason to drag my ass out of bed at the ungodly hour of…8 am. Hmmm, limited options, really. Well, the first thing listed in the “Princess Patter” for the day is…Zumba! So what that it’s 80+ degrees out and this is held outside on Deck instead of in one of the nice air conditioned venues. There’s a nice breeze today. It’ll spare me the dizzying walk around the track which takes 7 turns to make 1 mile. In their infinite wisdom, the designers of this new ship decided to eliminate the Promenade Deck which allowed you to circle the entire ship. A little more than 2 trips around that would make up a mile. Okay, so off to Zumba I go. I made it to the half way point. My efforts could only be compared to a spider on a hot plate. I have ZERO rhythm and seemingly less coordination. And although my hips WILL move, they don’t seem to do so in tune with that latin music that dictates the work out. Definitely no Latin leaves on this family tree! Guess it’ll be back to walking the circuit for me.

The Fuss Budget is very low today...a mere 5% chalked up to the lack of a Promenade for my daily walk...oh...and cause I had zero luck at the roulette table.
Other Entries
-

I just had a thought! I go to zumba every Monday and Wednesday morning that is not at the Goodlife and costs $5 a session. You should come with me...get your non latin hips moving. You might like it! Went to Evangeline in Saturday...the same leading actor guy in Bitter Girls was in the show...excellent singing and acting! Yes, he was the guy in his underwear!

I just might take you up on that Sue. I have nothing on my agenda on Monday and Wednesdays through the winter months.