That started from this tropic port

-
The best laid plans…blah, blah, blah, you know the rest. As we have 2 stops in St. Thomas during the course of our cruise, I had something different planned for each visit. It’s the only port that we visit twice, once on each 10 day itinerary. Today I decided we were going to catch the ferry to St. John…and it was going to be real convenient too. We would disembark the ship at the Havensight Pier and walk approximately 5 minutes around the pier to where the ferry leaves. Easy, peasy…providing, of course, that the ship docks at the Havensight Pier…which it didn’t. It docked at Crown Bay. No worries…I CAN be flexible…I usually CHOOSE not to be…but I can be…so, we’ll just switch plans. Perhaps we’ll dock in Havensight on our next stop in 2 weeks.

Welcome to the Virgin Islands
. Thomas…and if that wasn’t enough in the 90+ degree heat, we also did the “99 steps” up to Blackbeard’s Castle. But we shopped around a bit first and got ourselves good and heated up, and then commenced the uphill climb to the Castle. And what did we find…not open. It’s closed for the summer…who knew that the summer months wouldn’t be considered “tourist season”. Oh well, it’s all about the journey, not the destination! After traveling both up AND down the 99 steps, we found ourselves in a complete and total lather, so opted for the rather inexpensive taxi ride back to the ship.

Tonight we checked out the Princess Theatre for a very “Jersey Boys”-like performance by a group called The Unexpected Boys. They were quite good…but I wasn’t compelled to buy their CD.

The casino was absolutely packed tonight, so I couldn’t get near the roulette table to test my luck. Oh well…it’ll be there tomorrow night. 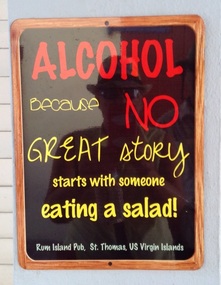 Truer words never spoken!
. It started at breakfast this morning. I’m behind a woman in the line to order my freshly made omelette. There’s a list of items that you can choose from to add in. Mine is always quite simple…cheddar cheese, mushrooms, tomatoes, peppers. All items on the list. And when I place my order, it’s reminiscent of the Seinfeld Soup Nazi episode. I don’t waste any words. I just list the ingredients. The kitchen staff, well, most of the ship staff for that matter, are from the Philippines. Their English is minimal. If the ingredient is on the omelette “checklist” they’re pretty good at ticking the right box. So, the woman in front of me places her omelette order. It goes like this; “I’d like an omelette with mushrooms, ham, and onions. Oh, but I want the onions sautéed. And I’d like white cheddar not orange cheddar. And can you make that well done?” Now come on...you may as well say you want the onions fricasseed, cause I doubt they’ll get it. And “well done”? Really? It’s an omelette, for heaven sake. Good luck with that! My omelette came exactly as ordered. Hers? I can only guess.

The second incident of the day that irked me was when I was in downtown St. Thomas. As most of you female readers can attest to, looking for a bathing suit is one of the least appealing shopping excursions there is. I have a 2 piece that I like, and the top is reversible. But don’t I get a hankering today to just pick up a cheap bikini top while in town 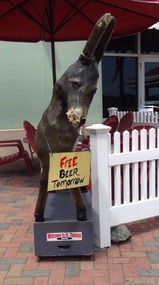 Timing is everything!!
. I don’t want Body Glove, or anything designer. And I love my black suit bottom, so anything will go with them. Can you explain to me why a man’s entire shirt can be bought at a store for $20, and yet a tiny little woman’s bikini top which requires far less material costs $29.99. No…there’s no bottom with that…just the top. And we are in a beach town, to boot! Oh well… I don’t REALLY need one.

And lastly…tonight in the theatre for the show. Watching people taking their seats was a real exhibition of laziness. Picture this…theatre seats in rows of around 15. You can enter from either end. Of course the rows fill up from the centre aisle outward. Kier and I arrive and pick our row. There are a few people in it, on the aisle end. We walk all the way down and around, up the wall side and enter the row from that end to save everyone from getting up and us having to inch our way by them all while trying not to step all over everyone’s feet. That’s us…the exception to the rule. Not one other person would strain themselves to walk that extra couple of hundred yards to save climbing all over people to get to that seat at the very end of the row.

And don’t get me started on the people who refuse to walk up ONE floor on this ship. Especially from Deck 15 up to the buffet on Deck 16. I really have to bite my tongue when they get all huffy because the elevator arrives full and they can’t fit in. I just want to scream “here’s a novel flipping idea…why don’t you WALK!” Oh my…tomorrow’s another day!!!
Other Entries
-

Wow it sure sounds like you are having fabulous weather. Makes time by the pool so nice. I have been to St Thomas but the only thing I really remember is just an insane amount of Jewelry Stores.. Have a Surper day tomorrow and I hope no one upsets you tomorrow. LOL People truly are interesting.

Katrina You make Me laugh everyday. You should write a book. Are there a lot of elderly people on the ship? Next time someone pisses You off, I want You to take a "selfie" and send it to Us so We can see the look on Your face. Love the blog and hope You are having a great time.

St.Thomas jewellery stores would be a real drawing card pour moi! Doesn't it take all kinds to make the world go round....Did you actually purchase the bathing suit top??