Aboard this tiny ship

-
Today we docked in Dominica…not to be confused with the Dominican. Dominica is a small island of 290 square miles situated between Martinique and Guadeloupe. And my opinion of Dominica…eyh. In their defence, they did suffer a serious hurricane in early September, but I think their problems existed looong before that. Although very lush and green, in my opinion, it really has little to offer.

The good news of the morning, however, was that Speed Sudoku has made it’s way back onto the ship’s onboard activities…and I have established 4:28 as the time to beat in completing the challenge 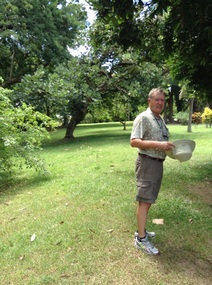 Trees and more trees...but no flowers.
. And now, I have added a Princess Cruises PEN to my collection of kitch. Kier just shakes his head at the crap they hand out for prizes. Yup...just jealousy!

We opted to walk into Dominica as we could see the town from our balcony…that generally means it’s not too far to walk. There was a shuttle offered at $2/p, each direction, but it was only 93 degrees outside, and I really needed to feel like I’d exercised. Our only plan for today was to walk through town to the Botanical Gardens, and then check out Jack’s Walk and head to the top of Morne Bruce. Oh, and did I mention it was a mere 93 degrees out today? And how is it that “steps” have become so prominent in our daily activities? The sign for Jack’s Walk indicated 35 steps. Easy, peasy after yesterday’s 99 steps, right? Well, apparently this place is the centre of false advertisement. The 35 steps was just the tease. Once up that we met a nice young man dressed in military camouflage. I asked him what he was doing there, and he said he was police. That made me kind of leery to carry on, so I asked if it was safe. He said there were a few incidents, but the last few years there has been police posted on the trail and it’s been fine. It looked to be straight up, and the sign said it was a 20 minute walk, so I asked the next logical question. Is it worth the walk? He said it was a nice view and he thought we could do it in less than 20 minutes 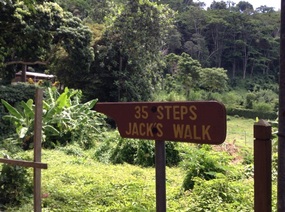 jpg
. WRONG! OMG…it was one steep trail with steps the whole way, and switchback after switchback. At one point I had to stop for a seat...and to check my racing pulse. Probably should have strapped on a BP cuff...but I might have blown it up! It was then that I realized the “incidents” of which the young officer spoke...were, without a doubt, medical emergencies! Perseverance…and just plain stubbornness paid off, and we finally reached the pinnacle. It was a nice view, for sure, but I have a whole new understanding of that label “hot mess”…cause I WAS one when I reached the top of that vista. One thing I learned today though, when they tell you that going down is easier…NOT true!! The only thing going for me on the way down…was gravity...and the desire to return to the air conditioned ship, in one piece.

The Fuss Budget was a low 10% today, but mostly relative to one woman who, based on her accent, MUST be from New Yawk. She’s the “one in every crowd”, the centre of attention wanna be 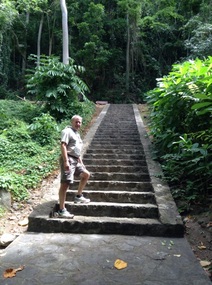 What's wth all the steps?
. She’s the one that laughs too loud, makes the none too subtle comments that are supposed to be under her breath. She can be found in the front row…by choice. And she’s the first one in line to sign up for the contest or competition. She may even be the one that the Cruise Director and her staff know only too well, and may even be trying to avoid, but can’t. Well, she was at the theatre tonight for the musical entertainment. She was up on her feet during the final number…and she was reaching up towards the stage trying to get the attention of the main performer. Apparently she had some important message to deliver? Shortly afterward she was found in another venue signing up for a trivia game that I had also signed up for. It was going to be recorded and played on the Princess tv channel. It was a game relating to all things Hollywood, celebrities and movies. Right in my bailiwick. They only needed 4 volunteers who would be placed on one of 2 teams with either the Cruise Director, or Assistant Cruise Director. And by my count, they only got 4 volunteers...one being “her”. She was the one up talking to the MC of the game beforehand trying to ensure a place on a certain team. They wouldn’t promise her anything. Then, shortly before the teams were announced…they decided to go another way…make it a purely audience participation game. Drats…there went my only opportunity to be a) on a gameshow, and b) on television. Oh well…my luck, I would have ended up on HER team…and I would have had to slug her…just on priniciple.
Other Entries
-

Maybe you and the New Yawker will be besties by the end of the trip! If I hear about a woman from new Yawk murdered aboard a cruise ship over a trivia game I will know it's you! Ha Ha

Piece of advice -- never hike the Camino! And how many steps did you register on your Fitbit?

Enjoying the blog and having a good chuckle while reading about your adventures. Maybe tomorrow your Fuss Budget will be zero ; )

Awwww you! Im cruising tonight as well on my way to Grand Manan..bahahaha...Love reading your blogs im laughing right out loud amongst my cruise buddies from Charlotte county