The mate was a mighty sailing man

-
Today was filled with fun and excitement, and not all of it cruise related!! We arrived in Grenada today. It’s in the West Indies and has a population of 110,000. We had an excursion booked through the cruise line, which is something we don’t often do. It wasn’t a real early start, but we treated ourselves to a room service breakfast on our balcony before we headed out. We thought we were booking a nerve wracking river tubing excursion…but we decided that the truth of the matter was that we booked a treacherous hour long bus ride over a high and narrow mountain road (up to 1910 feet above sea level) followed by a relaxing half hour river tubing to bring our blood pressure down, finished off by another hour long bus ride to get our adrenaline pumping once again. The funniest part of the whole tour was after we had completed the river tubing and were getting dried off and back on our “death trap”, oops, I mean motor coach…they produced liability waivers for us to sign. That pretty much sealed it for us…we realized then that the waiver was more for injuries sustained via a traffic accident than it was for any incidents on the river tubing!! It was quite fun, all in all, and not the least bit scary. Now don’t get me wrong…at no time did I say that it was good value for our money. But then again, no excursion booked with the cruise line ever is. You pay for convenience, and that’s what you get. But it was fun and we were certainly glad we did it. I got some fabulous video clips too, with my new GoPro, but they will have to wait for my final entry when I’m back home and using a more stable internet connection.

It was a short stop in Grenada and we were pulling away from the pier by 1:45 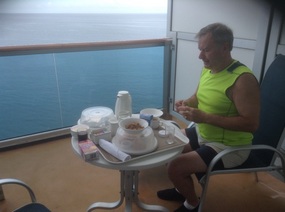 Balcony breakfast
. And this is what will lead to today’s Fuss Budget. Today I’ve rated it at about 20% and it’s ALL about technology! The Captain announced this afternoon that there were problems, yet again, with the on board internet. There have been many, many problems since we boarded with the “newly upgraded” internet system. It just goes to show that not all upgrades are improvements!! Imagine my frustration when I had an email sitting in my mailbox regarding a price drop on a flight I’d been watching, only to be unable to read it to determine exactly WHICH flight had dropped in price. Finally this evening the internet seemed to get back on track and I was able to determine that my UK flight for May 2016 had dropped below $800. I was off to the internet café and a secure connection to book. I almost had to bump the old budget up to 30% when I arrived at the café to find all the terminals occupied but 1…and that one had no chair as the couple sitting at the next terminal had to both sit down to read their messages from their HMO, their cat sitter, or their grandkids pet turtle 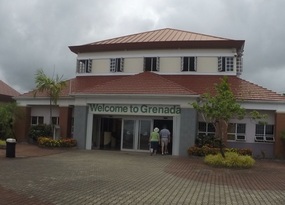 jpg
. WHATEVER!! But alas, it only took me bending over the keyboard typing for about 2 minutes before gramps realized that he shouldn’t be using 2 chairs for 1 computer. He says to me “Oh, do you want this chair?”…to which I WANTED to reply “No, I always prefer to stand and type”…but I took the high road and settled for a “Weeeellllll”. His wife then spoke up and told him to give up the chair. Before you get all up in arms about me forcing a senior citizen out of his seat…it took me about 7 minutes to book my flight and then I returned it to him. What the next people who wanted to use that terminal did is, as they say “not my circus, not my monkies”.

Needless to say, I’m quite elated now about the bargain I secured for my flights, so really…my Fuss Budget is now at ZERO!!

You know, it never rains, but it pours. Two days ago I got word that our flight to Vegas at Christmas time had dropped in price so we had to beeline down to the internet café that day to book those flights. We holiday planners never have a day off! But I don’t mind…cause you all know how much I LOVE a bargain!!!
Other Entries
-

That sounds like a fun day. Wish we were with you. ENJOY