-
The older I get the longer it takes to recover from trauma...like 12 mile bike rides in extreme heat and humidity. So, today was pretty much a recovery day. We enjoyed the sites and sounds of Aruba as experienced from a 1 mile radius of the ship. That meant a visit to the Crystal Casino. And before you ask...nope...nothing.

jpg
. I thought it seemed kind of odd that there were as many "locals" in the stores as there were tourists, which led me to discover that I wasn't really in the main shopping area. The good news, though, I was able to find a new bathing suit at 60% off. I really only wanted a top to go with the bottoms I already have. You can only imagine how tough it is to find a place that sells separates. In St. Thomas the cheapest suit top I could find was around $30...too much in my mind. At the store here in Aruba I got the entire suit for $14. I don't mind discarding the bottoms when I paid so little for the suit. And trust me...there's no way I will EVER wear them...

Apparently Aruba is known for its trade winds...and it was so windy up by the pool this afternoon that I almost lost my hat. The pool was like bathwater, but it was too windy to enjoy the deck. Off I went to defend my title at Speed Sudoku...and yes, I did. Won another big magnetic clip. Just what I needed...but actually it does serve a great purpose here on the ship where all the cabin walls are metal 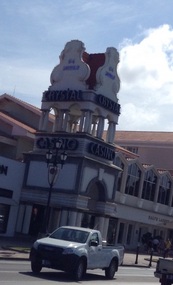 We are really getting to enjoy our "friends" at the table beside us in the dining room. I don't know their names, but I'm gonna call them Ron and Helen. I was sure her name was Helen until yesterday when I thought "Ron" called her "Fay", and then I thought he called her "Betty". Guess we could always ASK them their names. There's a novel idea!!

They were concerned about us yesterday when we were late for dinner because of our delayed return from the cycling excursion. Ron said "We thought of you guys today...I said, 'we don't know their names, but they must be nuts to be cycling in this heat". I responded "Oh, well, I'm Peanut and this is Cashew".

The Fuss Budget today is around the 40% mark and all chalked up to technology...again. I was certain that the internet here on the ship, that most people pay dearly for, but we get a limited amount for free, was the absolute slowest internet on the face of the earth. But I was wrong. That title goes to the lobby wifi at the Aruba Renaissance Hotel in Oranjestad. It was soooo s...l...o...w, but it was free, so I didn't mind waiting 10 minutes to open an email when the clock of free minutes wasn't ticking away. We're 2 days at sea now until we arrive back in Fort Lauderdale. We have about 100 minutes of free wifi left before we get another injection of minutes on the 11th. Will they last??? Only time will tell!
Other Entries
-

Less than speedy internet while floating about in the middle of the ocean...sounds like a first world problem to me!

Thanks so much for sharing Katrina. You are so funny. I look forward to reading your blog