-
It' a sea day today. These are the days that bring out the best and the worst of my fellow passengers. And because some are in their final 2 days before disembarking in Port Everglades, they can get especially cranky! I actually enjoy sea days for many reasons. I get to try out all the different things the ship has to offer, but the main reason is it's a great opportunity to study people and try to figure out their "story". There's this one woman, for instance, I've seen her around the ship alot. I remember her from the airport. She may even have been on our flight from Montreal. She's tall, blonde and lithe and I usually see her by herself, although she didn't arrive on the ship alone. She has rather prominent cheeks. No, I don't mean cheek "bones". Her cheeks are akin to Alvin and his brother's. She participated in "the" Zumba class. She disappeared early on. Sometime AFTER Mrs. Crazy swanned out, but before I made my escape. I'm sure she recognizes me when we meet, and I'm sure that she TRIES to smile...but alas, too much botox prevents me from noticing any friendly gesture. This woman has had WORK done...and when I see her at the breakfast buffet, I'm certain she's trying her best to make that work last. This morning we traveled on the elevator together...she was alone...again. I made a comment about it being time to eat...again. She replied that she really only wanted coffee. Likely story...I saw her a short while later carrying a plate of something and a tub of yogurt...but no coffee.

I spent the morning pool side and then for lunch, tried out Alfredo's, the pizzeria, and then Gelatos for a banana split 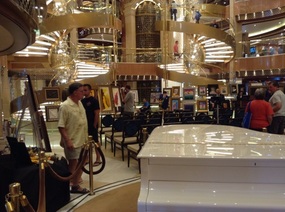 An art show
. After that, I was off to my balcony with determination to see some sea life. So far there's been nodda...zip...zilch. I told Kier we may have to toss someone overboard to stir up some sharks or something. But there'd be no point sending Mrs. Crazy over...she's so skinny and wired, the sea creatures would find her stringy. And Ms. Botox...one bite into her and it would be like a leaky balloon being let go...she'd fly all over before landing in a ball, just a shell. And there are some likely specimens on board with large beer bellies, but all that alcohol would surely give them a "pickled" taste. Guess I'll just have to be patient and wait.

The Fuss Budget was slightly elevated today...I'd say around 35%. You see, for one of the newer ships in the fleet, there seems to be very little on the daily entertainment schedule that interests me. So imagine my frustration when there are 2 things on that I want to take in. Shouldn't be a real problem. One starts at 8:15 in the Princess Theatre 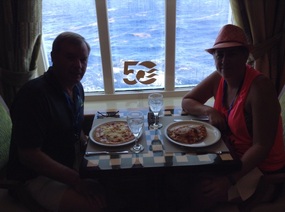 Lunch at Alfredo's
...that's as far forward as you can be on this ship. And the shows generally run about 40 minutes. The second show is in the Vista Lounge at 9:15, but that's as far in the back of the ship as you can be. And getting from Point A to Point B shouldn't take any longer than 5 minutes...if we get a jump on the crowd out of the theatre and don't run into any road blocks enroute. Well, wouldn't you know it...tonight is the night that the first show, which is advertised as a "comedy musician" is late starting. It's almost 8:25 before it gets underway. We're in the middle of a row, which, in hindsight was poor planning giving our need to get a jump on the crowd upon the show's completion. Okay, so the show's not great, but it's alright...and why is it the ones that aren't great are the ones that go long. This guy performed for a full hour. Threw the whole schedule off. Especially when we couldn't make a quick escape cause the old girl sitting next to us really liked the show...so much so that she dropped her purse on the floor and then when we were getting up to leave, she wanted to wait and check the floor for any lost detritus. When we did get out of the theatre we were behind a long line snaking through the casino. Blah, blah, blah, by the time we get to the Vista Lounge it's standing room only. Oh well...there's always next week!
Other Entries
-