On the shore of this uncharted desert isle

-
Whatever doesn't kill you makes you stronger...and whatever scares the beejeezers out of you makes you braver. At least that's my take on things. I like to shake things up once in a while, so I booked the zip-lining tour here in St. Lucia. With the memories of our first ever zip-lining adventure in Catalina Island, California still fresh in my mind, we headed off. Let me just say this, the tour we did in Catalina back in 2012 was not a "ship sanctioned" one. I found it on the internet, it had good reviews and we booked it on our own. There were only 5 zip-lines, but man, oh man, they were high. And one was over 1100 feet long. To say it was one of the scariest things I ever did is an understatement. In fact, when the bus transported us from the bottom of the hill to the top where we would start our adventure, I was very tempted to just stay on board and take it right back down again, we were that high up in the mountains. But, my fear was surpassed by my cheapness, so off I went. Even today, whenever I hear the phrase "step off", I almost break out in a cold sweat, because in that excursion you had to take a very large step off the platform into nothingness. I swore that day that I'd never zip-line again. Fast forward to today!

To say we were a little apprehensive was an understatement 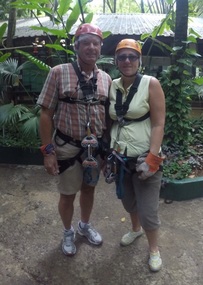 Two fashionistas rockin' their hair nets!
. Before today I had been 1 and 1 as far as excursions on this cruise went. I selected a fun river tubing adventure in Grenada which could have only been better had there been a bit more rain in the recent past to make the river a little more wet and a little less rocky. My second choice turned out to be not so good. The bicycle tour in Bonaire was a bit of a bust. Certainly nothing to do with the tour, but everything to do with the heat and humidity. So, we were due for a good one...but would we be scared out of our wits again. As much as I want to get those good video clips on my new GoPro, I didn't particularly look forward to being paralyzed with fear.

As per usual on these Caribbean islands, there was an hour long ride in what can only be described as a death trap, on narrow and twisty roads. Could the excursion be any scarier than that? I thought not.

We arrived at the Treetop Adventure Park, signed the necessary waiver absolving the company of any and all blame for incidents causing death or dismemberment, and then met up with our personal guide. Keenan was our man...more like a boy than a man, really, but helpful, and, well, "keen". His father lives in Pickering, Ontario, so we were practically homies!

This park has 12 zip-lines with the longest being 800 feet, and the highest 150 feet 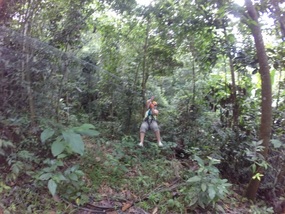 In action
. Easy peasy, I say. And it truly was. Right from the first line through the the last, it was fun, fun, fun. I was never afraid, scared or even leery. Surprisingly enough, it was a well run operation. Lots of staff, facilities and the equipment was well maintained. We truly had a blast and I got some great video and stills to remind me of the day. It just may overshadow those scary memories I still have from Catalina!

The Fuss Budget was a bit elevated today...in the 40% range. It started with our meal tonight in the dining room. Last night we skipped out early, before dessert, because the service was a bit slow. No fault of our servers Alvin and Mark. It was just because most people in our section sort of strolled in late. We were, of course, early. So Alvin was working hard all night trying to juggle everyone being at different courses. We just took a look at the dessert menu, didn't see anything appealing, so skipped out. No harm, no foul. Who knew!!! We were basically met with the cold shoulder tonight from Alvin 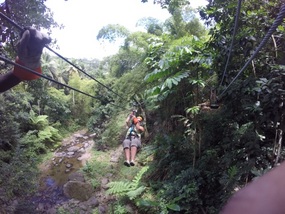 Cannonballing
. These waiters are very sensitive. He was over like a shot asking us why we left early last night. We just told him it was because there was nothing on the dessert menu that appealed to us. Guess he didn't buy it cause he was a tad brusque the rest of the meal. Really?? I don't need an overly sensitive waiter. I'm afraid to think how he would have reacted if Kier had said we left cause the service was slow!

And if that wasn't enough...it was back to the elevator shenanigans again this evening. I was coming up from deck 6 to deck 11 after having been to the casino to cash in my chips. I made the mistake of going to the large elevator bank at midship. There were several people milling about, as per usual. With 8 elevators, the waiting area is quite large. When the elevator doors opened up at one of the cars near to me, a woman from way over the other side started barrelling towards the open doors. She almost plowed over a couple of blue hairs who, typically, couldn't decide if they were going up or down 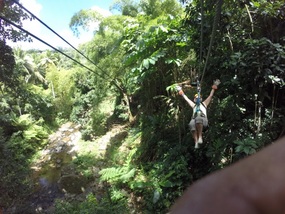 I'm zipping BACKWARDS!! Look Ma, no hands!!!
. As the doors started to close again, the woman threw herself at the call button to reopen the doors. It was really quite a feat of physical prowess for someone like her who was carrying a few extra pounds. The doors open again and in she goes with her hubby. I enter and move straight to the back after pressing the button for deck 11. Several more people herd in. The doors close, the elevator starts to move. Elevator Sally's voice comes on announcing "Deck 7, Promenade"....and...every one of those people got off the elevator...except for me. Even Mrs. Linebacker who exerted all that energy catching the elevator...she could easily have walked up ONE LEVEL and saved herself several steps. What is it with these middle aged, seemingly fit people?? Would one level of stairs really mess up your day??

I think it's time for me to leave...
Other Entries
- 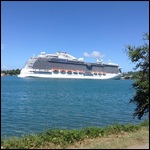 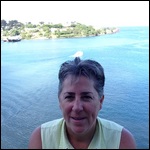 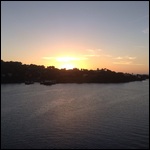