-
I always said I was still a kid at heart, and apparently, I'm still a kid from the neck up. We were in Barbados today and instead of taking an organized tour, we just walked into town and did a bit of shopping. Last week in St. Thomas, I wanted to buy a new pair of sunglasses' but they were all too big for my face. Then, as I was leaving the store I found a rack of kids sunglasses. Not only where they smaller, but they were cheaper too...double bonus. Today in Bridgetown I found a rack of hats. It's my new thing. I tried a bunch on. They're "one size fits all"...but not me. Not to mention they were $30 US which I thought a bit steep. Then I spotted some smaller ones...and they fit...and they were only $19 US. Turns out they were kids hat. But it's not like they have cat ears or elephant trunks on the them. They're just nice straw fedoras, with a little colour. Win/win. Guess I've got an unusually small head...but chalked full of brains, in case you didn't know!! 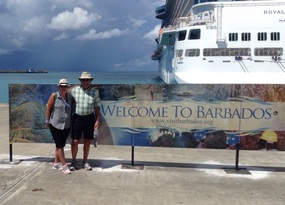 jpg
. I was happy to find that our waiter seemed to have gotten over his little temperamental patch. And tonight we did yet another show in the theatre before retiring to our cabin to watch the Jays play.

The Fuss Budget today was a small 2%, mostly caused by the hoard of Barbadians who hounded us silly all day to take taxis and tours. One fellow started walking with us towards town telling us how far it was and that we should take one of his tours even after we politely declined. Eventually I said "are you going to walk all the way to town with us?", so he backed off. It wasn't bad enough that we ran the gauntlet while trying to get out of the port area, but then when we stepped outside the secure zone, it was just like waving a red flag in front of a bull. We were practically swarmed. And you just can't politely say "no thanks"...cause many just don't take no for an answer. Funny though, they never bothered us at all when we were on our way back to the ship. Guess they figured we were a lost cause by then! It's not hard to have such a low Fuss Budget when you have little contact with the rest of the passengers. At the rate we're going, by the last day of the cruise we'll have little or no contact with anyone other than our cabin steward and our waiter. Fine by me!!
Other Entries
-

That's the biggest turn off with doing an Island cruise -- getting harassed disembarking the ship. Especially when they won't take no for an answer and force you to be rude. Sounds like you were very diplomatic today!

Barbados has such beautiful turquoise waters..can hardly wait to spend month of January!! Wow, as I recall, walking to town from terminal is quite a distance. Did you see any zeddar vans?.. Cheap mode of transportation.

Wasn't far to walk Doreen. Maybe 15 minutes. Could have taken a $2 shuttle, but eating so much, I needed the exercise!!