-
For a first day with only a couple of things on the agenda, we sure made the rounds. It was a great flight in for Kim and I and a smooth transfer from Heathrow to Paddington, where we arrived a half hour early. The No Jet Lag pills seemed to do the trick because I slept a bit on the plane and woke feeling refreshed.

We checked into our hotel, got right into our room and then headed over to the Sussex Arms for our complimentary drink

jpg
. Mine was a Pimm’s Cup…cause when in England…

The game plan was established. First order of business was up to the St. John's Wood tube station to find the Abbey Road Zebra Crossing. We were there in no time, despite the current unavailability of the Bakerloo line. For those of you that aren’t familiar, or have never been, the Abbey Road Zebra Crossing is from the iconic album cover of the Beatles. Might not have been the best idea to arrive there around 3:30 pm…on a workday…when there’s road construction in the area…and the street is reduced to one lane…and about a dozen people are milling about trying to recreate their version of the Beatles CoverPhoto. Picture this…vehicles lined up in both directions, horns are tooting, pedestrians are being rude, drivers are getting frustrated. We were one black taxi away from a road rage incident. Especially when one fellow, let’s just call him Mr. Greenjeans because of the shank of dyed green hair…don’t know which Beatle he fashioned himself to be, but if he walked across that zebra crossing once, he walked across it 15 times 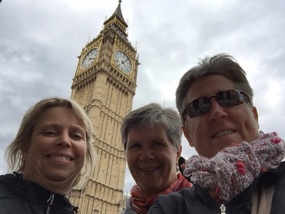 Big Ben
. First himself, then he and his friends, then with monologue on how to walk, which leg to lift, which arm to swing. To heck with road rage, there was damn near pedestrian rage. We just wanted to get in to snap one little clip of video so I could extract a shot of us imitating the historic crossing. Patience was a virtue today, and we finally got what we wanted. Mission accomplished.

From there we headed to Westminster to get a look at Big Ben, the Parliament, and Westminster Abbey. Now I was always told that queueing up was a very British thing. So I wasn't overly surprised to find a line established at the red telephone box that is strategically located to allow for a typical tacky tourist photo with Big Ben in the background. Who are we if not tacky tourists? In the line we get. Being that queueing up is apparently a British thing...and we are at a tourist attraction which is likely NOT attended by local residents, we shouldn't have been all that shocked that by the time we got to the front of the line, some tourist jumped right in front of us 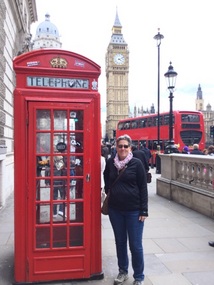 2-jpg
. Well, Shelley was done with being virtuous, so advised the line jumpers, ever so nicely to "take off, eh". Mission accomplished, the sequel.

We proceeded across the Thames to the London Eye where it was extremely quiet. We made the circuit in a capsule with only 4 other people, half of whom were fellow Canadians. After the Eye it was close to 5:30 pm so headed over to check out Gordon’s Wine Bar. We couldn’t stay, though, as it seems to be THE place for the after work crowd and not only were there no tables inside, but the line for service at the bar was 20 deep. We checked out the Crypt Café at St Martins in the Fields and were resoundingly underwhelmed. Although it sounds like a creepy spot for a meal, it’s actually quite…well…normal, for lack of a better word.

We passed through Trafalgar Square, checked out the smallest Police Station in London, saw Piccadilly Circus, the shops of Regent Street and Oxford Street, did a walk past of Hyde Park and ended up back near our hotel for a quick bite to eat. I lost track of the mileage we put on…but I know one thing for certain…my dogs are barkin’!

It is getting late, and I’m long overdue for some actual sleep in the full prone position…so in the words of Porky Pig, “th…th..th…that’s all folks!”.
Other Entries
-