It's a loverly day, but that don't mean Jack!

-
It was a soup to nuts kind of day. We did it all and covered a lot of territory doing it. After a hearty “full English” we struck out in the direction of Hyde Park with GPS in hand. Surely there would be some geocaches to be found in a great big park like that. And what better way to enjoy the walk over to Kensington Palace then by hunting for some hidden treasure.

And the weather today in a word…gorgeous 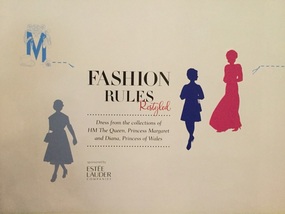 jpg
. Sure we had a sprinkle or 2 throughout the day, but by and large the sun was out, the winds were down, and the temps were just beautiful.

The GPS led us to the Royal Albert Hall, a great building and area in which I’d never been. Behind the Hall, and close to the Royal College of Organists, we found my first cache outside of NB. I was going to make a comment about a 'College for Organists', but I am officially taking the high road!!

We had a wonderful tour of Kensington Palace, even though we weren’t met at the door, OR summoned up to their private quarters, by Will and Kate. The Fashion Rules Restyled exhibit was great, and it was a unanimous decision that Princess Margaret was a true fashion plate for her time.

After finishing the Palace tour and checking out the gardens, which were in full bloom, we headed out to find Princess Diana’s favourite pizza joint in the Kensington High Street area 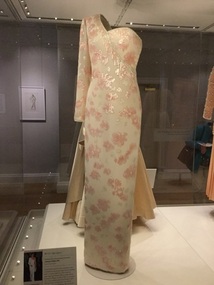 My fav Princess Diana dress
. It was a wonderful Italian spot called Da Mario's and I had what can only be described as my best meal thus far on the trip. The pizza was ‘magnifico’. But, unfortunately, I’ve now ‘fallen off the wagon’, I’m back ‘chasing the dragon’, as I succumbed to temptation and ordered a bottle of Coke with my meal. It was the icing on the cake and totally completed the excellent dining experience.

The one thing that they didn’t have at Da Mario's was a dessert menu that was especially tempting. Kim had found a bar called ‘Sticky Fingers’ that was in the area. It is purportedly owned by Bill Wyman of Rolling Stones fame, and named after one of their albums. (I’m told that EVERYONE knows that…besides me…but in case you didn’t…now you do. But I think there are more musically challenged people within my circle of friends than just me!). In lieu of dessert, I had a nice thick banana milk shake. Shelley has been telling me that I’m not eating enough fruits and vegetables, so this was my attempt at correcting that!

Tonight we were off to the East End of London and a Jack the Ripper tour. We had a very amusing tour guide and our 1 ¾ hour tour ended up being a bit over 2 hours. And even though the area has vastly improved in the last 100+ years, we still found it a bit creepy over all, so returned to the comforts of Paddington for a quick bite before heading to bed.

Another full schedule for tomorrow…and another train trip.