Getting Down at Downton

-
It was time to get our cool on today…rub elbows with the upper crust, the British aristocracy, the rich and famous. We were off to Highclere Castle, the home of the Earl and Countess Carnarvon. And for you heathens who don’t know why that’s special…it’s the location of the blockbuster hit series, Downton Abbey. 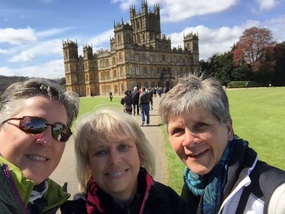 jpg
. We arrived an hour early for our 1pm Castle entry, so spent the time strolling around the grounds where Mary, Edith, Tom and the Earl and Countess of Grantham have strolled hundreds of times before us. I had high hopes since the recent series finale that the Castle would incorporate a greater Downton focus, particularly in the gift shop. Alas, my hopes were dashed when the tour was once again heavily focused on the real Earl and Countess instead. But heck…I guess it IS their house!!

Something I can claim on this tour that I wasn’t able to on the previous one…I actually clamped eyes on the Countess Carnarvon in the flesh. Shortly after questioning whether the homeowners skip town during their “open house”, we were strolling toward the back exit of the Castle and met head on the lady of the house with her dog. It was one of those “was that really?” moments, and she was gone upstairs before we could even think of asking for a photo.

It was a nice day, all in all, but unfortunately, when you put me in a place where good breeding is an asset, like British Castles and the like, it tends to draw out my “inner geek”. And sure…anyone can take the usual photo standing in front of the Castle…but check out some of these gems!!!
Other Entries
-