-
Our final day here in London was full of surprises and secrets…but everyone knows that I’m shiite (that would be the Irish term for shit…pronounced sh-eye-t) at keeping either. So here goes… 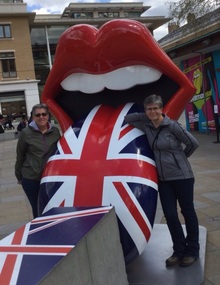 Saatchi Gallery
. And for those that have seen my IPod playlist, there will be no argument. Not a secret that I don’t know my U2’s from my Fleetwood Mac’s from my Beatles. So when Shelley discovered there was an exhibition at the Saatchi Gallery about this little known group called the tumbling rocks…no, the spinning pebbles…no, wait, the Rolling Stones, I wasn’t sure how much appreciation I would have for it. Do I even KNOW the names of any Stones songs? I did know the names of Mick Jagger and Keith Richards…oh, and Bill Wyman cause we visited his restaurant. Beyond that…not a clue. It was a beautiful day and a nice walk through Hyde Park to get to the gallery, so off we went.

I must admit, after spending a couple of hours wandering around the memorabilia, looking at the clothing, and, of course, shopping in the gift shop, I have an entirely NEW appreciation for the Stones. I think I like them!! It’s a shame I didn’t discover them in their heyday. A greater shame I didn’t discover them in MY heyday!! To see them now, it might be nothing more than a bunch of old guys who have outlived their youth. But we’ll see…if the opportunity presents itself, I may just take in one of their concerts, cause heaven knows, I’m far from youthful myself!

After taking some time for the inevitable “pack up”, we headed out to the East End of London to discover the mysteries of the Chambers of Flavour. We received our secret instructions earlier in the afternoon and made our way via the London Overground 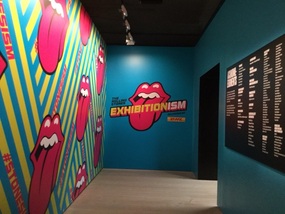 1-jpg
. The area seemed to be rather seedy, and when we approached from an alleyway toward a door marked with a huge letter “X”, we wondered if, perhaps, we were being swept into a world of human trafficking. All the secrecy around the evening made us curious if they weren’t recruiting for their illicit sex trade business, and we might disappear, never to be seen again in the UK or North America. Smuggled via cargo ship to Thailand, or Uzbekistan. It never occurred to us that 3 women, all over 50, might not bring in a lot of dough as sex slaves…but ya never know…there could be a market for that!!! All our conspiracy theories were proven wrong…which is obvious cause I’m sitting here writing this. We entered through the door into the the waiting room where our journey in the “machine” to various flavourful “chambers” would commence. It was exciting, it was scary, but the minute our first “journey” was completed, it was nothing short of amazing. I can say no more as I took an oath of secrecy and I don’t want to risk losing my “alumni status” with the Gingerline

2-jpg
. Suffice it to say, a FANTASTIC time was had by all and I will most certainly look at joining them again on a future trip to London.

After being safely returned to the area from whence we left, we traveled via Overground and tube to the Tower of London to participate in the 700+ year old tradition of the Ceremony of the Keys. After all the excitement of the Chambers of Flavour, this was a very calming event, quiet, and steeped in history.

We weren’t allowed to photograph the INSIDES of ANY of our activities today. All cloaked in that small layer of secrecy. So unfortunate…cause I just hate secrets!!
Other Entries
-