And then there were two...

-
It’s travel day today, but not all of us are traveling together. Kim was off first thing this morning to the bus stop for her ride to Victoria Station in London, and then to her Heathrow hotel. Shelley and I, via rail and ferry to Dublin. And oh, what an absolute pleasure our trip has turned out to be. With lots of assistance and guidance from various locals, we had a smooth transfer from our hotel in Liverpool, to Central Station, to Chester and then to Holyhead. Chester train station was a zoo, with train after train spewing out hundreds of people. And here we thought Chester was a little sawed off nowhere kind of town. I was curious. I had to know what it was about this little town that was causing such an influx of people. Especially when I overheard an employee telling someone that yesterday was “ladies day” and they had over 20,000 people. Turns out it’s the Chester Races. The English take horse races to an entirely different level. The suits, dresses and fascinators were everywhere. Alas, we were on too tight a schedule to take in the festivities. Maybe next year!

After a thoroughly relaxing ferry ride across the Irish Sea, we landed on schedule at the port in Dublin 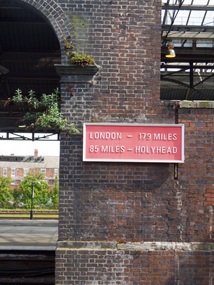 Chester Train Station
. A rush hour taxi ride to the hotel and then we were checked in quickly and efficiently. And oh, what a lovely room it is. It is exactly like the room Fay and I had last year, with a large king bed and a single bed beside. A pleasant surprise seeing that we only booked a twin. Plus, instead of being right over the back patio to Darkey Kelly’s which tends toward the noisy until after 11pm, we are on the front of the hotel with a lovely view of Christ Church Cathedral. Now let’s hope the hourly bells chiming don’t keep me awake!

After a quick tour around the neighbourhood, we found a lovely Café for a late dinner. It was wonderful to have a salad for a change as both Shelley and I have had our fill of the usual pub fare. That’s not to say we won’t be trying out the wings here at Darkey Kelly’s at some point in the next 5 days! But tonight, we were both craving something a little healthy. Who knew the Irish could make such a tasty Greek Salad!!

Busy day tomorrow as we are off on a day long excursion.

Till then!
Other Entries
-

I'm sure you will go to Blarney Castle - don't bother kissing the Blarney Stone, you have to hang backwards where they take your picture - save your kisses for a wee lepracaun (spelling??).